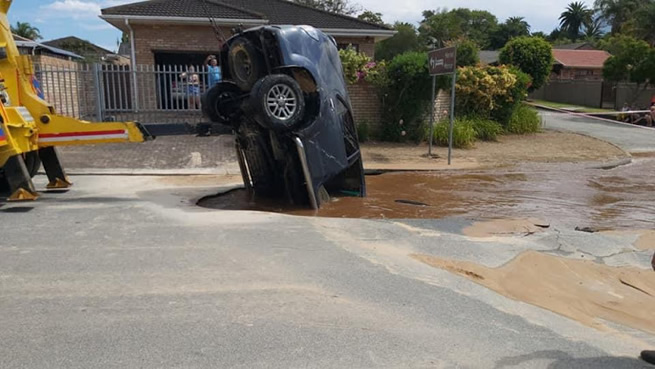 A motorist found himself in deep water after being “swallowed” by a huge hole in the road caused by a burst underground pipe in George.

George municipality said the unlucky driver was involved in “a traffic incident” on Saturday when he drove into a water-filled hole along a collapsed section of Herriot Street in Genevafontein.

Pictures of the incident on social media showed a Toyota SUV almost completely submerged before it was lifted out of the hole by a crane.

Municipality spokesperson Athane Scholtz confirmed the pictures were of the traffic incident on Saturday.

According to the municipality, no-one was hurt.

The municipality issued a statement on Saturday urging residents to stay away from the burst pipe in Genevafontein and use water sparingly.

The pipe supplies the town’s main water treatment works and because of the burst, the municipality said water could not be pumped to the facility’s holding dams on Saturday.

“The municipality appeals to residents to use water sparingly to ensure that potable water supply is sufficient while the supply line is disrupted. Properties in the eastern suburbs of George, including Kraaibosch and surrounds, may experience some drop in water pressure,” the municipality warned.

Water gushed from the pipe for several hours before engineers managed to close several valves.

Engineering teams worked throughout the weekend to try to fix the problem and sandbags were placed to protect private properties. Storm water teams ensured drain systems were kept clear.

But on Sunday evening the municipality send out a notice saying the repairs were delayed after heavy rains caused a mudslide affecting the worksite.

“It has since been cleared, the bedding below the drinking water pipe redone and work continues. Should no other incidents occur, the connection should be completed overnight or tomorrow [Monday]. More rain is expected overnight which may impact repairs.”