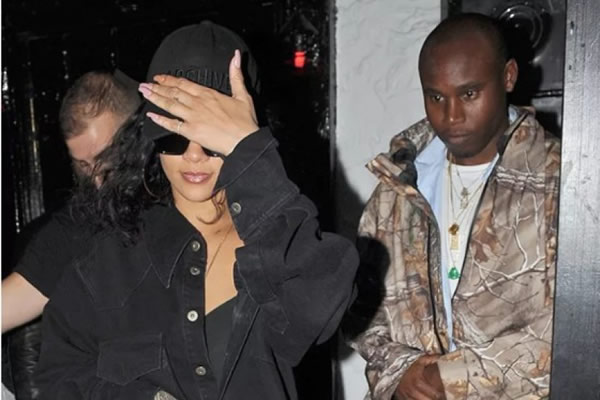 Rumours about Rihanna's new boyfriend were taken into overdrive last week after veteran musician was recently seen leaving The Scotch Of St James Night Club in Mayfair, London at 4.45am.

Following the rumoured split between pop star Rihanna and her billionaire beau Hassan Jameel, eagle-eyed people have kept watch over the dating life of the singer.

Rih was leaving with a unknown male companion who she also went clubbing with to the same club last week. Word is that he is a WEALTHY African heir.

Rihanna’s new companion is believed to be the son of a wealthy Nigerian oil magnate. And rumors are swirling that he and Rihanna are a new couple. They actually look pretty cute together.

And speaking of cute, Rih looked great. Rihanna was wearing a black cap, a loose baggy black shirt along with a pair of white sneakers and large black sunglasses.

The sexy singer is also getting KINKY, because her fashion lingerie line recently release some accessories to make the bedroom more fun, including HANDCUFFs.

The Barbadian singer and style icon has added to her Savage x Fenty lingerie line with a capsule of “Xcessories” that are, indeed, X-rated.

Highlights from Rihanna’s fetish-friendly range include fuzzy handcuffs, satin wrist restraints and a whip “small enough to fit in your handbag,” according to the product description. Several products, including leather nipple pasties and a riding crop, sold out almost immediately — but will be restocked.

The sexy extras, intended to help shoppers “kink it up a notch,” cost between $18 and $24 each, in keeping with Savage x Fenty’s accessible price point.