This was confirmed by SABCNews . 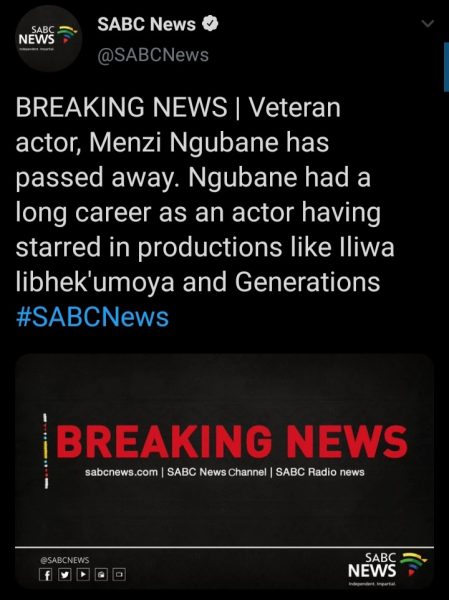 Menzi Ngubane was a South African actor best known for playing the role of Sibusiso Dlomo on the soap opera Generations from 2003 to 2014. Ngubane has also played numerous roles on other South African TV shows, including Yizo Yizo, Ashes to Ashes, Gold Diggers, and Heist.

He is popularly known for his outstanding role as Sibusiso Dlomo in Generations.

Ngubane won over South African audiences in a career spanning several decades, starring in several film, TV and stage productions including popular SABC1 soapie Generations as Sbusiso Dhlomo, and most recently as Judas in Isibaya.

South Africans were looking forward to seeing Ngubane join the fifth season of The Queen in 2020 but were disappointed when it was announced that he fell ill.

His health scare saw an outpouring of well-wishes under the hashtag #PrayForMenziNgubane. However, Menzi's wife and family at the time issued a statement lambasting “inaccurate and unverified news” that claimed the actor was critically ill.

In 2012 he was rushed to hospital with organ failure. Menzi's health again made headlines when the actor suffered kidney failure and subsequently underwent a transplant in 2014.

The cause of his death is yet to be established.