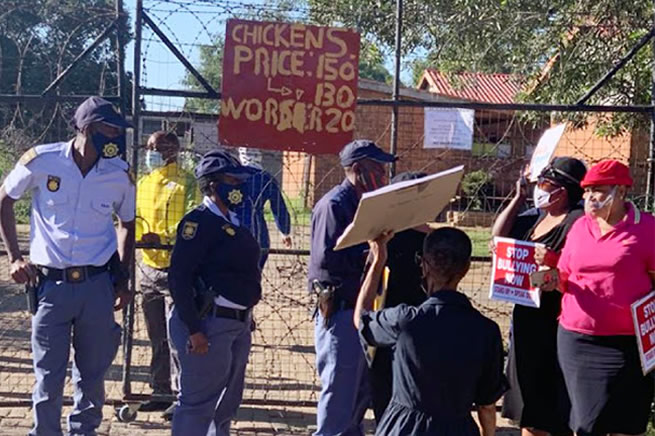 A senior pastor at the Soweto branch of the Five Fold Interdenominational Church Outreach Ministries has been accused of the rape of a minor, abuse and bribery.

Members of the Pimville branch have now lodged a complaint with the Commission for the Promotion and Protection of the Rights of Cultural, Religious and Linguistic Communities (CRL Rights Commission).

In the complaint to the commission submitted by congregants last Tuesday, they accused the pastor of sexually abusing an underage girl who apparently fell pregnant with his child. He is also accused of touching female congregants inappropriately.

Attempts since Sunday afternoon to reach the pastor and his wife, whose identities are known to this paper, have been fruitless.

Requests for an interview sent via SMS and WhatsApp were also not responded to.

No criminal cases have been opened against the pastor.

In their complaint, the congregants accuse the pastor of the sexual grooming of a 14-year-old girl, who lived at their estate home in Fourways, Johannesburg.

In a brief interview with Sowetan last week, the now 24-year-old woman admitted to having been taken advantage of by the pastor when she was in her early teens.

She said she would give further details once she had spoken with her lawyer.

According to the complaint, the girl was sent home in the Eastern Cape when she fell pregnant.

“A few years later, after the girl had grown beyond legal age limit and gone back to stay with the family, she continued to have sexual relations with the pastor and a second baby was born in 2020. The second baby came after a few abortions that were paid for by the pastor,” reads the complaint.

It’s alleged that the pastor’s wife gave the girl money to silence her.

The congregants also claim that the pastor had sexual relations with two female congregants whom he allegedly wanted to marry in a polygamous marriage.

“Towards the end of 2020, there were growing allegations of extramarital affairs and a possible polygamous marriage agreed to by both the pastor and his wife. The potential second wife (name withheld) is a member of the congregation who has been seen and proven to be in a relationship with the pastor as he himself confessed to [it],” reads the letter in part.

The congregants also linked the pastor to another church member whom he allegedly got engaged to.

However, his wife found out and allegedly chased the woman away from the church.

The pastor was forced to step down in January following an intervention by the church’s executive management.

“I can’t give you the exact number of complaints or people that are affected. There are just too many of them,” said Lukele.

“We received so many grievances from the youth and we took those to the executive committee before we went to Gogo (the pastor's wife). Gogo told the church how sorry she was and the pastor resigned. He was also called to the executive meeting where he apologised. [Someone was appointed] but some congregants are against [the] appointment, which has divided us.”

CRL spokesperson Mpiyakhe Mkholo confirmed that they have received the complaint.

The commission has been investigating cases of abuse, cults and financial mismanagement in churches. They have been holding public hearings since last year.

Mkholo said they would invite the complainants and the victims to present their cases before they summon the alleged perpetrator to appear before the commission. “We don’t have a mandate to remove a church leader. If there is a potential criminal case we assist the victim to open a case,” said Mkholo.

The church has branches across Gauteng, including in Tokoza, Ivory Park, Houghton and Alexandra. It also has members in QwaQwa and Welkom in the Free State, in Durban, the Eastern Cape and Swaziland.

The sex scandal was also highlighted in the church’s feedback session held last month where the management committee conceded that it was made aware of the abuse last year.

“[The parish management committee] was not aware of Baba’s [the pastor] conduct until last year when the youth sent a memo.

"[The committee] was not aware that Baba wants to take isithembu ( to marry more than one wife). Mama (the pastor’s wife) only told individuals last year after we returned from lockdown. Everything we are saying was reported by the youth and other concerned people,” reads parts of the minutes of the meeting.
Rapist pastor claims he has divine healing p