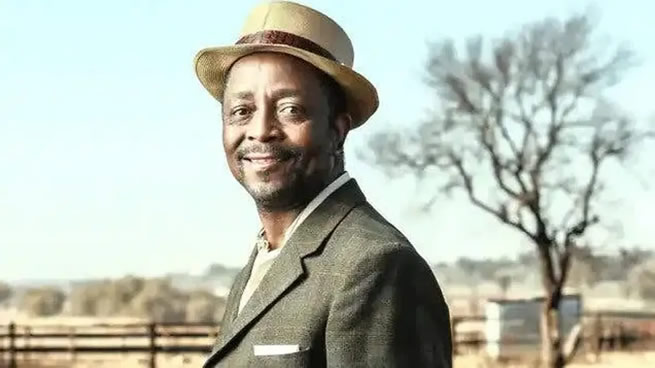 Fresh from a nasty divorce, The Queen actor Peter Mashigo has found new love in the arms of his wife Mpumi.

The 58-year-old controversial actor, who plays Jackal Mkhondo on the Mzansi Magic telenovela, said his “I do’s” during this past festive season.

The low-key union was held in Mpumalanga where Mpumi comes from.

The news of Mashigo’s marriage comes as a shock to some family members who were not invited.

Close sources to Peter say he has become paranoid and does not trust some of his family members, accusing them of leaking his personal business.

“We only heard through our cousins that they were travelling to Mpumalanga for Peter’s wedding, we were not shocked as he once accused us of leaking his personal business to the papers,” said a family member.

According to the family members none of Mashigo’s kids was invited to the wedding.

“I saw his kids in December and they were clueless about their dad getting married,” said the source.

Mpumi has three kids from her previous relationship and Peter has two.

Mashigo’s marriage comes during his ongoing child maintenance battle with his ex-wife of 16 years, Florence.

last year reported that Mashigo was accused by his estranged wife of being a deadbeat dad.

The actor, who has featured on numerous soapies and telenovelas, including The Throne and Isibaya, has allegedly failed to pay papgeld for 11 years and is now in arrears of R390 000, according to court documents.

The veteran actor was expected to fork out R3 000 a month towards the maintenance of his two children, a 15-year-old and 24-year-old. Florence alleges he last paid maintenance in 2009.

Mashigo did not respond to questions sent to him.