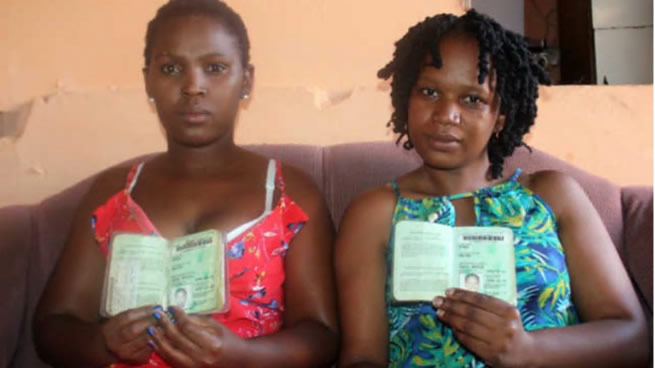 Two Khayelitsha women who share the same name, surname, date of birth and ID number, say the Department of Home Affairs is making their lives hell.

The identity crisis even prevented one of them from writing her matric exams.

The 31-year-old single moms are both named Noluvo Ntaka, born on 9 September 1990 at the same hospital just a few minutes apart.

Their parents, who are not related, share the same surname and unknowingly gave them the same first name.

All this was apparently too much for an official at the Department of Home Affairs in the Eastern Cape, who gave them the same identity numbers.

The women say they’ve been trying to get the department to correct the error for years, but to no avail.

Noluvo(1) says she discovered the mix-up in 2006 already.

“We were both born at the All Saints Hospital in Ngcobo in the Eastern Cape and I found out in 2006 when I went to open a bank account and I was told that I already have one,” she explains.

“They had a different profile picture on the account, and they gave me the address and that’s how I found Novulo(2).”

In another uncanny twist, they both ended up living in Khayelitsha.

“We found out that our parents are not related but they shared the Ntaka surname and named us both Noluvo,” she adds.

Noluvo(2) could not write her matric exams in 2008, as the system showed she had already done so the previous year.

“I have three children and she has one, but when I checked on the Home Affairs system, it shows that I have four children,” she tells the Daily Voice.

She says she’s unemployed and was surprised when money was paid into her bank account from the UIF Covid-TERS fund, meant to assist employed people.

Noluvo(1), who works as an administrator in the financial sector, says the R5000 was meant for her but she doesn’t blame her namesake for using the money.

“A lawyer once came to my office with a letter of demand and I tried explaining that I do not owe them,” says the mother.

“They asked for my ID and said I was lying until my boss intervened and explained the situation.”

The women say they have been in and out of Home Affairs seeking assistance and were told to go back to the Eastern Cape where the error originated.

Noluvo(2) says: “When we went back, we were told that there are no folders from 1990 and they cannot help us.”

She says only fingerprints separate them but this does not help them: “If we can get Home Affairs to fix our ID numbers then life will be back to normal.”

David Hlabane, a spokesman for the Department of Home Affairs said: “The matter is being investigated, after which we will provide feedback.”