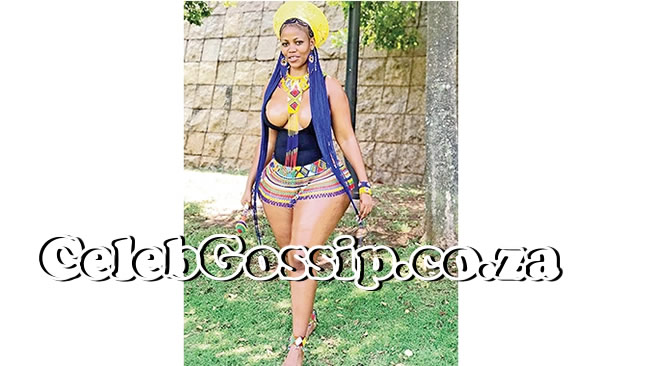 Trailblazing artist Queen Lolly is accusing award-winning musician and producer Master KG of forcing her to have an abortion after impregnating her.

Queen Lolly, real name Nomfundo Shezi, also alleged that she exchanged blows with Master KG’S then girlfriend Makhadzi in a violent love triangle dispute at the Jerusalema hitmaker’s house in Midrand this year.

The voluptuous Shezi said she was now at least one-month pregnant with Master KG’S baby after he bonked her without protection because he wanted to exchange low body fluids with her.

This after they both tested negative for HIV/AIDS. She also said the Xola Moya Wam hitmaker was selfish and a disaster in bed, and only cared about his own carnal pleasure.

Speaking to Sunday World, the 26-year-old from Greytown, who is now based in Pretoria, said she and Master KG met when she needed a beat for a song she had composed about three years ago.

“I first contacted Master KG about a beat three years ago when I was still based in Durban. I used to buy my own flight tickets to come to Pretoria at that time for the beat, but he never delivered,” she said.

She said that instead of weaving a beat for her, Master KG wormed his way into her panties.

“Instead of a beat or a studio session, Master KG asked for sex sessions with me. At fi rst I refused to sleep with him but gave in when I moved to Pretoria in January this year.”

The Shonamalanga singer said she visited Master KG in his Midrand house where they exchanged low body fluids without a rubber.

“As a couple, we began having sex in his place in Midrand and we did not condomise as Master KG likes raw sex, and I fell pregnant. I kept hoping that Master KG would give me a chance to work with him, so I waited but the waiting was futile,” she said.

Shezi further said she told Master KG about her pregnancy but he dismissed her as a looney.

“His response was that ngiyahlanya mina ekhanda [I’m delusional and crazy in my head. He never wanted to entertain me on that pregnancy topic and

because of pressure from him, I decided to abort my baby during the lockdown period,” said Queen Lolly.

She added that after several more rolls in the hay with him, she fell pregnant for the second time. When she told Master KG about the second pregnancy, he again accused her of being delusional.

“He wants me to abort my baby again, but I won’t do it this time.

“I feel like Master KG is using me for sex. The reason I only agreed to unprotected sex is because he showed me his HIV results and I trusted him.

“I refuse to have an abortion again. Though I am carrying his child, I don’t want anything to do with him.

“I will keep my baby and raise him like my other kids. I am not going to have an abortion again because of a man who does not want responsibilities. I don’t want anything to do with him anymore.”

She also alleged her relationship with Master KG was volatile after she had a physical fight with Makhadzi, who found her at his house. She said her problems with Makhadzi started when the Matorokisi hitmaker posted on social media that it was nice that Master KG was in love with her only.

She said when she responded that she was sharing Master KG with her, hell broke loose and this resulted in a physical fight at his place when they bumped into each other. Sunday World is in possession of raunchy Whatsapp messages between Shezi and Master KG in which the Limpopo- born muso asked to hump the songbird before she went to some studio.

The conversation later turned sour when she told him that she was pregnant and Master KG asked her why she thought it was him who impregnated her because she was seeing another man. Mastet KG said: “Yes we were seeing each other and I last seen her last year – but I had no clue that she was once pregnant.”