Makhadzi's former manager Rita Dee Nephawe has warned the star to move her 'matorokisi' far away from her. following the star's recent social media outburst.

In an explosive rant on Twitter on Sunday, Makhadzi (whose real name is Ndivhudzannyi Ralivhona) accused Nephawe of owing her money for royalties from her 2019 hit album Matorokisi and YouTube views, and stalling ownership changes to a car Nephawe had bought for her five years ago which she paid up. 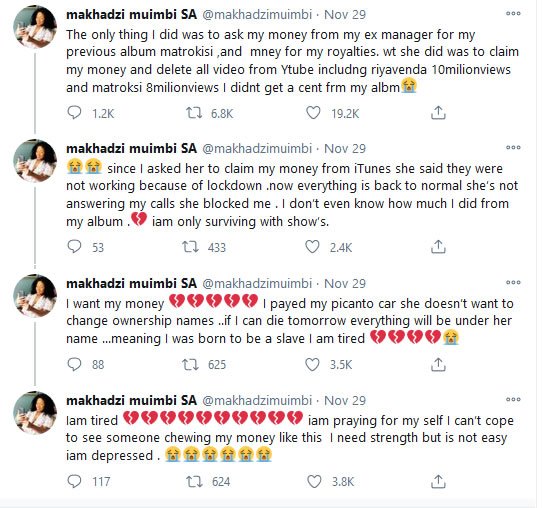 Nephawe however advised her lawyers to slap the star with legal papers intending to sue her for defamation of character following the tweets.

"Last time I spoke to her [Makhadzi] was in February. It was to my surprise when she posted threats on social media because of YouTube views. I then decided to delete the YouTube videos so that I can cut ties with her completely."

The artist manager, who still has other artists including Razie Kay and Rabs Vhafuwi under her name, claims she has not received a cent from YouTube from Makhadzi's songs Matorokisi and Riya Venda, which had garnered close to 20 million views before she deleted them from the video viewing site.

"YouTube has not paid me a cent. I deleted the videos on Saturday morning after she sent threats on Facebook. If YouTube was giving me any money, I would not have deleted the videos – I would have made sure that the videos garnered more views so that I could get more money. There was no money, that is why I deleted them,"she added.

Makhadzi alleges that Nephawe is the reason behind her depression, as she is benefiting from her even after they split.

However, Nephawe alleges that Makhadzi was paid R430 000 in February, following their first public spat.

Nephawe claims she doesn't owe the star any money because Makhadzi signed a direct deal with distribution company Open Mic and cut her from their managerial arrangement.

"We did the album last year and had a distribution deal with Open Mic. February is the only month they sent us a statement of how much they sold to shop and caller tunes and things like that. I did not claim from Open Mic because she then signed a direct deal with Open Mic and so I then distanced myself from that and cut ties with her,"she alleges.

Nephawe says the papers to the Kia Picanto she had bought the star are her insurance because Makhadzi had crashed an Audi belonging to her and has since not fixed it.

"She wants me to give her the car papers and then I am left with a bill to pay for that Audi which I asked her to fix and she didn't."

Makhadzi's new management promised to return with feedback but had not yet done so by the time of going to print. The star did not respond to messages sent to her and her phone rang unanswered.

Nephawe's lawyer, Ndivhuwo Munyai, confirmed that they have sent a communication to the star, with the intent to sue for defamation of character.

Popular social activist and lawyer Tumi Sole had offered legal help to Makhadzi on Sunday. He did not responded to questions but promised a public update on the matter later on Wednesday on Twitter.