The singer claims to have slipped into a state of depression after months of watching someone else spend and enjoy money that is rightfully hers.

Venda music sensation Makhadzi (real name Ndivhuzannyi Ralivhona) has once again opted to air her grievances via social media, claiming she has been unable to contact her former manager Rita Dee Nephawe in order to claim funds owed to her.

“The only thing I did was to ask my money from my ex-manager for my previous album matrokisi [sic] ,and mney for my royalties. wt she did was to claim my money and delete all video from Ytube includng riyavenda 10 million views and matroksi 8 million views I didnt get a cent frm my albm,” [sic] tweeted the singer.

“since I asked her to claim my money from iTunes she said they were not working because of lockdown .now everything is back to normal she’s not answering my calls she blocked me . I don’t even know how much I did from my album. i am only surviving with show’s,” she added. 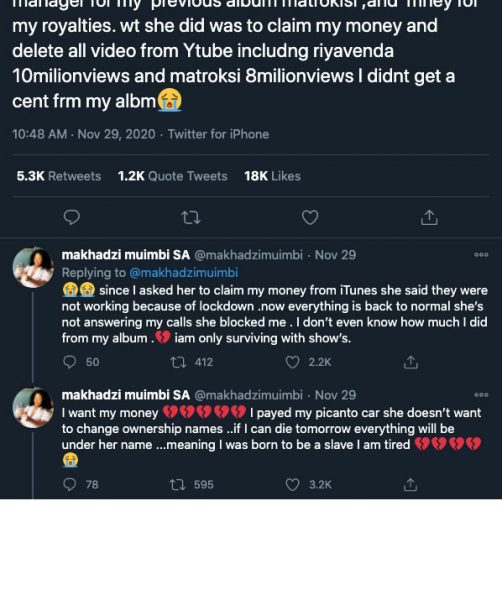 After stating once again that she wanted her money, the Matorokisi hitmaker added that she had paid off her car (a Kia Picanto) but added that the car was under Nephawe’s name and she refused to turn ownership over to her.

“If I can die tomorrow everything will be under her name …meaning I was born to be a slave I am tired.”

This has, however, left fans confused as the star was pictured next to a brand new Mercedes-Benz back in January.

She concluded by stating that she was praying for herself as she “can’t cope to see someone chewing [her] money like this”, before adding that the whole situation was depressing her.

Makhadzi’s rant resulted in the hashtag #RitaDeeMustFall which trended on Sunday evening after angry fans called for Nephawe to face the music for her alleged misdeeds.

Another artist, DJ Mr K2, turned to Daily Sun to air his grievances with Nephawe alleging that she had also not paid him for work done on music for Makhadzi.

Both Nephawe and Makhadzi’s new management have been contacted for comment and neither have yet to respond.

A quick glance at Nephawe’s social media feeds make it seem as though it is business as usual for her as she can be seen posing on the beach and going out for lunch in between promoting upcoming live performances for her remaining artists.