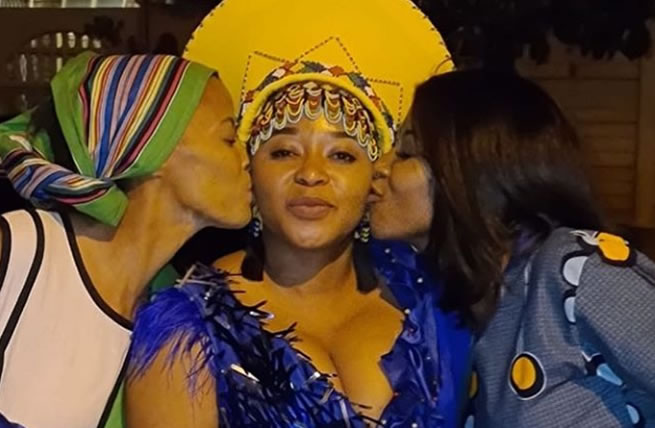 Skeem Saam actress, Pebetsi Matlaila is now totally off the market after she finally said ‘I do’ to her man.

Pebetsi Matlaila who plays the role of Mokgadi Maputla, on the educational drama Skeem Saam, got hitched over the weekend in a beautiful traditional ceremony, where everybody was dressed to kill.

Her friend, Capricorn FM DJ, Hellen Seabi confirmed the good news on her Instagram, with the caption:

"We love happy endings! I love you to infinity…. Today was nothing short of amazing, I’m at peace knowing you’re in good hands….. Forever my Bestie, mother to my God child !!! My heart is at peace , I go to bed content because God. Ko rata faktup!!! #Vantoeka …. Skeem Sam sak’dala"

Hellen also uploaded beautiful photos of the bride in her traditional regalia and she looked flawless and beautiful.

We love happy endings! I love you to infinity…. Today was nothing short of amazing, I’m at peace knowing you’re in good hands….. Forever my Bestie, mother to my God child !!! My heart is at peace , I go to bed content because God. Ko rata faktup!!! #Vantoeka …. Skeem Sam sak’dala @pebetsimatlaila

Recently Pebetsi Matlaila said she wasn’t the one for marriage and didn’t want to get married at all, due to the uncertainties of marriage.

The actress did admit though, that her boyfriend had suggested marriage to her several times and she was hesitant to take the next step, because she heard many horror stories from married women.

I have been asking married people about the pleasures of marriage, and what goes into marriage, and how does marriage work and what kind of challenges do you find along the way, and is love enough to make a marriage work…but the responses I have been getting, especially from women…make me think twice about marriage..

Now the actress seems to have taken a leap of faith and finally said yes.

We wish Pebetsi Matlaila and her hubby an eternity of joy!