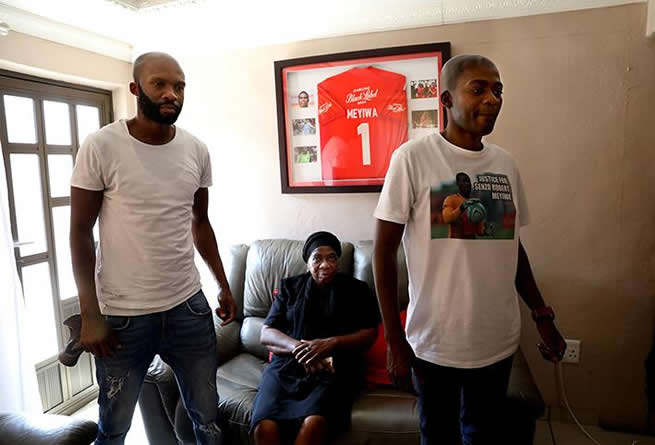 Several SA celebrities have expressed their sadness and frustration at the ministry of police after watching a heart-wrenching interview with visibly broken Senzo's mother, Ntombifuthi Meyiwa.

Radio presenter Unathi Msengana, actor Zola Hashatsi, actresses Mogau Motlhatswi and Florence Masebe are some of the celebs who spoke out after watching Senzo's mother's pain on the sixth anniversary of her son's murder.

Senzo was gunned down in Voslsoorus, east of Johannesburg, in the presence of his girlfriend Kelly Khumalo and members of her family in 2014.

In a clip that has gone viral on social media from an interview with Newzroom Afrika, an emotional Ntombifuthi called on her son's spirit to speak out and reveal who the real shooter was.

Watch the clip below:

DISTASTEFUL I said this yesturday on my show and I say it again. What the ministry of police did yesturday to hold a press conference on the SIX ANNIVERSARY of Senzo’s death was truly distasteful. To open and dig into wounds that have NOT healed that they are a part of was dispicable. Knowing that Senzo’s mom is mourning her son’s death and still has had NO closure because the POLICE have FAILED to solve the case was DISGUSTING to witness. Only a man who has NEVER felt the energy of his son grow inside him and never felt the kicks of a miracle move inside him would sanction such a CATASTROPIC DISPLAY OF DISREGARD. Knowing the mother has also lost her sons father. DISGUSTING PATRIARCHY that does NOT understand that SHE IS STILL IN MOURNING. Waow

Several celebs joined the rest of Mzansi to voice their opinions about the police, the case and the emotional interview with Senzo's mother.

Their reactions were sparked by the interview and the events on October 26, courtesy of the ministry of police with police minister Bheki Cele at the forefront.

Cele held a press conference on Monday where he and national police commissioner Khehla Sitole provided a much-anticipated progress report on the developments in the murder case of the slain soccer star.

Cele was reported by TimesLIVE as having announced that five suspects had been arrested in connection with the murder of former the Bafana Bafana and Orlando Pirates goalkeeper. Cele said the arrests were made between 8am and 10am on Monday in Gauteng and KwaZulu-Natal.

Many people, including the celebrities below, found the press conference distasteful, especially in light of Ntombifuthi's visible pain in that emotional interview.

Read the full celebrity reactions below.

“Distasteful. I said this yesterday on my show and I say it again. What the ministry of police did yesterday to hold a press conference on the sixth anniversary of Senzo’s death was truly distasteful. To open and dig into wounds that have not healed that they are a part of was despicable.

“Knowing that Senzo’s mom is mourning her son’s death and still has had no closure because the police have failed to solve the case was disgusting to witness. Only a man who has never felt the energy of his son grow inside him and never felt the kicks of a miracle move inside him would sanction such a catastrophic display of disregard. Knowing the mother has also lost her son's father. Disgusting patriarchy that does not understand that she is still in mourning. Wow”

“Dear #BhekiCele, What you did yesterday to the Meyiwa family on the sixth anniversary of their son's death was utterly a disgrace, distasteful and m***ery. You are a sorry excuse of a minister and I wish you all the worst. Also the same energy you put in closing clubs down, use it to fight GBV and our females being kidnapped. I have no love nor respect for you. You disgust me as a SA citizen. I say you are a joke.”

“A mother’s pain is every woman’s pain. We might not ever fully understand it but it hits us hard.#vukasenzo and give your mother peace.”

“Grieving in full glare of a nation that forgets about your ever-present pain only to come parade your pain when it serves prevalent agendas. That must be the longest nightmare. My heart breaks for that mother. May she find the answers she seeks so her healing journey can begin.”