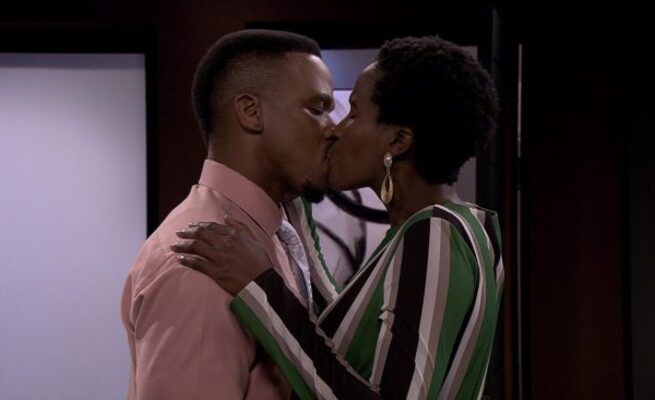 Seasoned actress Masasa Mbangeni has cautioned fans against asking her sexual questions about her scenes with male co-stars, saying the comments get “a bit rapey”.

The convo was triggered after Masasa shared a nostalgic picture of herself and veteran actor Siyabonga Twala in a theatre play they did together. The tweep asked Masasa if Siyabonga was a good kisser.

“Hayi sisi, this man is old enough to be my father! Also we were at work. I wasn’t there to assess that,” the actress said.

The tweep didn't see anything wrong with her question, so she went on to ask another, this time asking about Siyabonga's age and commenting on his looks.

“This tweet sounds rapey. Cima mntase cima! Can’t have separate rules for them and us,” Masasa said.

Feel particularly nostalgic today. Acting with Siyabonga in this play was truly a highlight . pic.twitter.com/P0SxOi1Am1

😭this tweet sounds rapey . Cima mntase cima! Can’t have separate rules for them and us . https://t.co/Z5ncdRGacc

The actress, who is well-known for bringing the character Thandeka of Scandal! fame to life, had to explain to a tweep why her question was unwelcome.

She told the tweep asking such questions was “high key predatory”, and the kind of comments the actor wouldn't appreciate.

Masasa also said with the demand, mostly from women actors, for safe sets, she couldn't answer questions which would make sets unsafe for her male colleagues.

“Please don’t ask me if the men I work with are nice kissers. I don’t know but something sounds rapey, opportunistic and high key predatory about that sort of rhetoric. I can’t demand safe sets and also be answering such. Integrity to me means your word congruent with you actions”

please don’t ask me if the men I work with are nice kissers . I don’t know but something sounds rapey, opportunistic & high key predatory about that sort of rhetoric . I can’t demand safe sets & also be answering such. Integrity to me means your word congruent with you actions

Masasa has voiced out her opinion about safe sets in the past.

The actress once took to Twitter to explain why she believes it is considered “sexual harassment” when actors are turned on during intimate scenes with co-stars.

Masasa, who is no stranger to intimate scenes herself, shared her views on the topic after a Twitter user tagged her in a sex scene question that got tongues wagging about whether actors do become aroused.

“That would be sexual harassment. We discuss intimate scenes and block them with the care, safety and precautions needed so all feel safe. So, no. No-one gets turned on,” she said at the time.