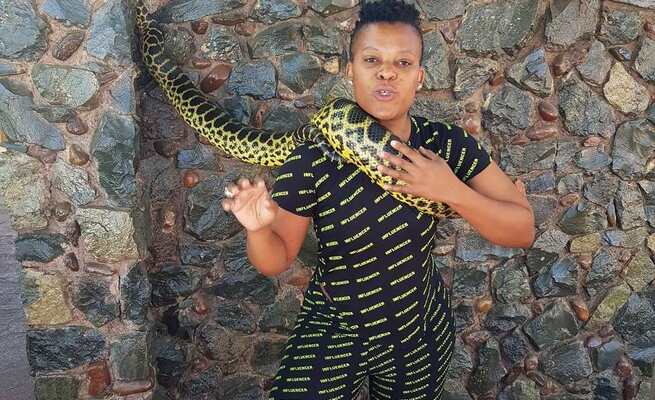 A young, spiritually gifted South African who spoke about the concept of uMamlambo on condition of anonymity explained that it is essentially a deity you worship and sacrifice things to (as part of ukuthwala) in order to obtain and keep money and power.

Popular panty-less dancer Zodwa Wabantu recently took to social media to share a video of herself holding a massive snake, which she claims makes people like her and gives her everything she wants.


Taking to her Instagram page she shared “Hi guys, I’m just waking up my Mamlambo, this is my mlambo, I get anything I want because of her. Don’t sell yourself short guys,” said Zodwa speaking in a mix of IsiZulu and English.

The uMamlambo is a water deity in South African mythology that is believed to be the “goddess of rivers.” Those who claim to have seen it have described it as a large snake-like creature.

A young, spiritually gifted South African who spoke about the concept of uMamlambo on condition of anonymity explained that it is essentially a deity you worship and sacrifice things to (as part of ukuthwala) in order to obtain and keep money and power.

The demands of the deity in exchange for these things can range from things like human sacrifices to pacts to never having children.

According to the source, if you do not comply with the demands of the Mamlambo, the consequences can be dire. In some cases, children can even inherit their parents’ servitude of uMamlambo.

“So basically what I know about ukuthwala is that it comes in different forms. There are people who thwala for the sake of getting rich, for the sake of their kids being successful, fast-growing business, cash in transit heist and so forth,” said the source.

In order to do so, someone would go to “a witchdoctor or a healer that also practices the dark magic, and they acquire this strength/luck from them in order to meet their required needs.”

“Unlike a person who is born with a gift, ukuthwala is a choice one makes for the most part.”

It can also be used by spiritually gifted individuals who feel as though the powers they have are limited and they undertake the process of ukuthwala to acquire more power.

“One of the current forms in the country is the use of little girls. Hence why the number of missing girls keeps rising. Those that use muthi are said to believe that there is great strength in the power of a pure woman, seeing as little girls are most likely to be virgins, these people then act in this vile nature.”

The source recalled a story from a few years ago that reportedly occurred in KwaZulu-Natal. It was the story of a man who walked into a police station carrying a bag full of body parts.

“He no longer wanted this life and needed help to get out. This would then make one assume that a person is well in their right mind when they do it, it is a decision made that one would rather cheat their way to success or riches.”

The source concludes by issuing the reminder that ukuthwala comes with consequences.

“One needs to bargain with something to the witch doctor, to ensure that the muthi stays working. Some people have a snake as their lucky charm, some have rats and some have utikoloshe. You can pay a monthly fee to your witch doctor to maintain these services…”

Missing even one payment can result in the complete opposite of what you want.

“You will lose money, cars, even your family members. Some people become one with a snake and that is where also young girls are warned in clubs to avoid having quick flings with flashy guys at bars and clubs because some of these guys have that snake to feed and it gets fulfilled by these souls it gets to be entangled with sexually.”

One of the lesser-known results of engaging in sexual activity with someone othwele is a continuous and unending series of unfortunate events in one’s life for no apparent reason.