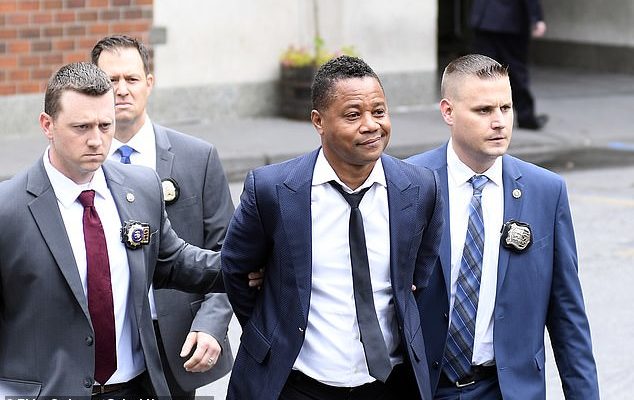 Actor Cuba Gooding Jr, already charged for groping three women, has also been accused of raping a woman in 2013, according to a civil lawsuit filed on Tuesday.

The Oscar-winning actor Cuba Gooding Jr has been accused of raping a woman twice in a New York City hotel room in 2013, according to a civil lawsuit filed on Tuesday.

The woman, identified in the lawsuit only as “Jane Doe”, said she met Gooding in a Manhattan bar in August 2013 and was invited to join him for drinks at a nearby hotel.

In the complaint, registered with the Manhattan federal court and reported by several US media outlets, an anonymous woman accused the 52-year-old actor of raping her in a Manhattan hotel seven years ago.

After inviting her for a drink, Gooding — who won the 1997 Oscar for best-supporting actor for his role in "Jerry Maguire" — took her up to his room.

The woman said the actor prevented her from leaving once he began undressing in front of her, then pushed her onto the bed and raped her twice even though she kept asking him to stop.

"Our client is making very serious allegations against Cuba Gooding, Jr. in her lawsuit which we have filed," said lawyer Gloria Allred, who is representing the plaintiff.

Allred is seeking an unspecified amount in damages for her client.

"She looks forward to obtaining justice in a court of law," Allred told AFP.

“It’s an event that took place seven years ago. No complaint was ever lodged. We believe the allegations and the complaint will be dismissed,” Heller told Reuters by phone.

The woman is seeking a jury trial as well as compensatory and punitive damages.

Gooding, 52, won a best supporting actor Oscar in 1997 for the film Jerry Maguire and is known for roles in movies including A Few Good Men and The Butler and in the television miniseries The People v OJ Simpson.

In 2019, the actor pleaded not guilty in New York to charges of groping three different women in incidents in nightclubs in the city in 2018. Those criminal cases have yet to be resolved.

Since 2019, some 20 women have accused Gooding of inappropriate touching or sexual harassment.

He was charged with sexual aggression towards three of the women behind the accusations.

The actor's trial in Manhattan was set to begin in April before it was postponed indefinitely due to the novel coronavirus pandemic.

It is not known whether the woman who filed the civil suit for rape contacted the police or the Manhattan District Attorney's office.

Gooding became known for his role in the movie "Boyz n the Hood" (1991). He recently portrayed OJ Simpson in the mini-series "American Crime Story: The People v OJ Simpson" (2016).

Gooding's case is one of several high-profile cases to come out of the #MeToo movement, which won a major victory in February when disgraced Hollywood mogul Harvey Weinstein was sentenced to 23 years in prison.