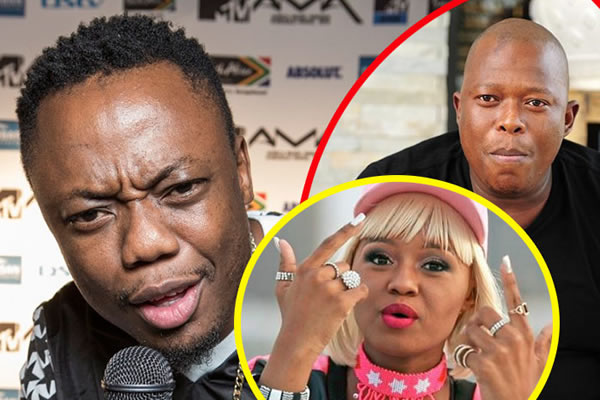 The life of Babes Wodumo, whose real name is Bongekile Simelane, is far from perfect, and has at times resembled an overly dramatic film that we can’t look away from.

The controversial qgom queen’s life has always attracted bad publicity, but last year was the most dramatic for Babes.

A physical assault on her during a Instagram Live feed went viral and was followed by her laying assault charges against her boyfriend, Mandla “Mampintsha” Maphumulo. In the video, Mampintsha was seen attacking the 26year-old, an act that was met with anger by the country and saw him being labelled a woman basher.


He later laid assault charges against Babes, but the pair soon found their way back into each other’s arms and have since dropped their charges.

Shortly thereafter, the pair released a song titled Khona Iyngane Lay’ndlini, loosely translated as “there are children in the house”.

Her fans were not happy, saying she had failed women by dropping the charges against her 38-yearold boyfriend.

After keeping a low profile for a while, Babes spoke to City Press this week.

“Look, I’ve trended quite a lot and not always for the right reasons. I would rather avoid all of that these days and grow up a bit. We are also people at the end of the day. When you get hungry, you eat and when someone upsets you, you react. We tend to forget that people are looking up to us. Mandla and I seem to trend quickly,” said the Wololo hitmaker.

This time around, she is trending for a good reason – she recently released a new offering, the 13-track Idandokazi.

Babes says lockdown helped her find the time to start and complete the album.

According to Babes, things between her and Mampintsha are less tumultuous: “Everything is better now. We understand each other better now. If something does crop up, he takes a walk and gets some air, which is what he should have done all along.”

She does hurry past the topic somewhat, but she confesses that they went to couples therapy.

Last year, Babes’ father, reverend Welcome Simelane, came out saying that he would be forced to wash his hands of Babes if she failed to see reason and stayed with Mampintsha.

“He was upset. As a parent, he cares and [things] got heated. We are all good now.

These things happen, but we are perfect now; everything is fine now.”

Just the other day, rapper Swizz Beatz and

Alicia Keys were dancing to her lead single, eLamont.

“I was so happy when I saw that. I could not even sleep. I mean, how would you feel? It was insane. I still can’t believe it.”

Locally, however, her latest work may not be as resounding a success as her first album.

Even though Idandokazi has received mixed reviews, Babes remains unfazed.

“I think it’s hate, maybe envy. It isn’t all as friendly as it seems between labels and it’s painful. Sometimes it feels like, because Babes didn’t sign with so-and-so, they [other labels] do things to block her progress. We, as artists, end up getting involved in the issues of the executives. We end up not seeing eye to eye, especially as women.

“You then find out one day that you and this person are mad at each other for reasons that you’re both uncertain of. Those amapiano guys are supportive of each other. That’s a solid unit, but with us … it’s not always the case.”

Babes came out and took the airwaves by storm, attracting the attention of the international arts community with her appearance on the Black Panther movie soundtrack, as well as her collaboration with the international electronica band Major Lazer.

“Working with Major Lazer was so rewarding. They have worked with some really good artists and for them to select me was surprising. People asked them why not this person or that person, but they insisted, and that was an honour and a privilege [to work with them]. It is sad that people overseas see the talent, but at home you are not as appreciated.”

The music tastes of the country have perhaps shifted away from the flavours of the shore and moved to the interior with the rise of amapiano.

“The two are very different. Ipiano feels a little like the beats are all made by the same person, but with gqom, there is more variation and different elements.

“Even the way the beats make your body move. Ipiano is a bit slow; it makes you move slowly like an elderly person. We aren’t trying to take it easy here; we dance down here.

“I would love to work with them [amapiano artists], but my issue is that I am a gqom artist. I have a ring; I’m married to gqom and so it’s hard to leave your husband like that. If I did that, it would be like removing my crown and handing it to someone else. I can’t have that. If someone produced a beat that flipped halfway from amapiano to gqom for me to do my thing… then I would be keen.”

She says she has been approached by record labels coaxing her to expand her sound.

“Even the amapiano guys are always calling me and sending me beats. I would not leave West Ink, though. I have also opened Wena Wodumo Entertainment, which is my side of things at the label.”

As it’s Women’s Month, she advises men to buy their women flowers and make them breakfast in bed.

“Yes! They should treat us better. It’s so painful to see women getting hit, raped and killed. Men need to understand that, if you get angry, you walk it off. Leave the house. Things should never get to the point where you lay your hands on someone.”