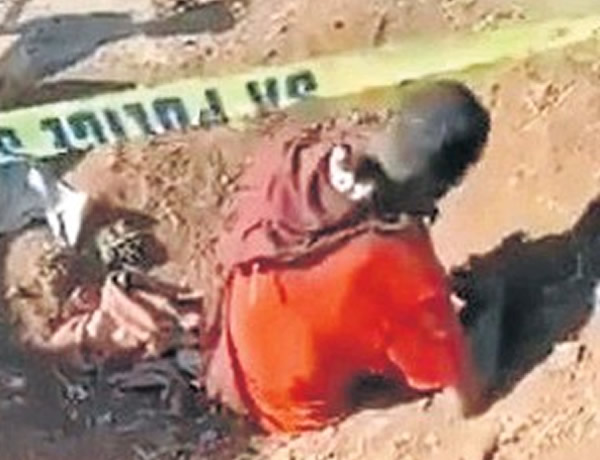 Provincial police spokesperson Capt Mavela Masondo said officers responded to the cemetery in Klipspruit West around 11am on Monday after being called by a security guard and told that a man had been buried waist-deep.

Video footage of the incident showed the man pleading for help as onlookers ask what happened to him.

Masondo said the 31-yearold man was assaulted by community members and his feet were bound with shoelaces.

Community members then dug a “grave” and partially buried him‚ said Masondo‚ adding that the man had been buried like that since Saturday.

Paramedics treated the man at the scene before transporting him to hospital.

There was speculation on social media about why the man was beaten and buried‚ but Masondo said the circumstances surrounding the incident remained unclear at the time of publication .

Officers came to cemetery after tip-off

General News Sharon Banda - 18 September 2020 0
ANC Nelson Mandela Bay councillor Andile Lungisa has handed himself over to authorities at the North End Prison in Port Elizabeth where his two-year...

General News Skhumba Hlongwane - 18 September 2020 0
Thenjiwe posted a picture of the dolls sold at Pep stores on her Instagram. She then asked her followers to look at the price...

Socialite Babalwa Mneno speaks on claims she is into human trafficking

Celeb Gossip Innoe Malaba - 18 September 2020 0
Socialite and model Babalwa Mneno has again slammed suggestions that she is involved in a human trafficking scheme, calling the claims “patently false”. The star...

Celeb Gossip Lee Nyathi. - 18 September 2020 0
Hawks advocate Dawie Joubert earlier argued that there was ‘no justification’ for Norma Gigaba to turn to an urgent civil court to challenge the...