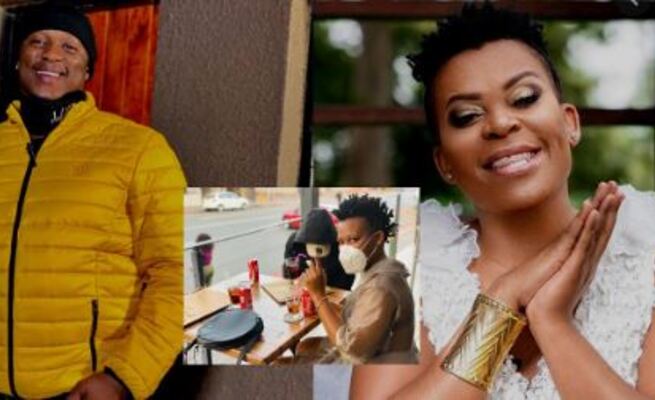 This follows after Zodwa Wabantu shared a picture of her new Ben 10 boyfriend whom she artfully hid from the glare of the camera.

She captioned it “The hiding of Ben 10”

Jub Jub then went to jokingly ask why the Ben 10 was hiding, hinting that he is cheating suspect.

To which Zodwa jokingly replied that he wasn’t hiding, she was the one who did him. She said she doesn’t want him to be in the public glare then said they weren’t cheating but just being private.

Jub Jub then jokingly warned them to watch out, because he was onto them if they slip up.

Many fans were not buying Zodwa’s need for privacy as she never misses a chance to flaunt her private life, including relationships on social media.

These days being watched by Jub Jub and his Uyajola crew or getting a knock from him isn’t good news.

The media personality and musician has gained quite a reputation for being the cheater buster as he exposes cheating partners on Uyajola.

While the Uyajola fans admire his tenacity and wit on the show, those on the receiving end of his prowess detest the man.

The recent Uyajola episode in Sunday saw a man who was busted for cheating tell Jub Jub that he was going to report him to Home Affairs for disrupting their lives.

He clapped back at Jub Jub saying he never interfered while the former was having problems with his baby mama Kelly Khumalo so he should leave people alone.

Another cheater in the second segment slammed Jub Jub and said life was better for them when he was in jail and that jail had changed him.

Jub Jub of course always takes this is stride and in case things get violent, the bouncers are always ready to handle the deviants.

Imagine Zodwa’s Ben 10 being busted on Uyajola , it would be a field day.