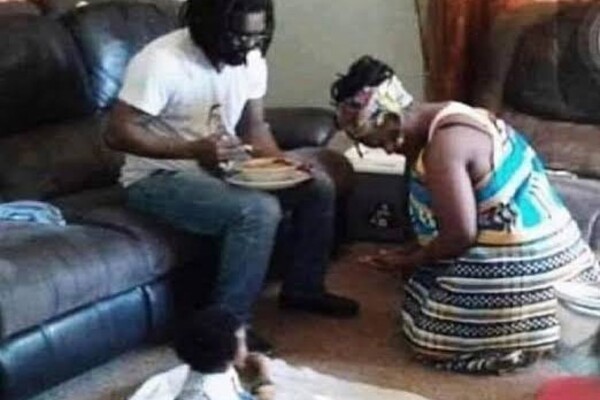 Generations: The Legacy actress Manaka Ranaka has weighed in on a debate around the custom of serving food to men and waiting on bended knee until they were done.

The star sparked fierce debate on social media recently when she posted a picture of a woman on bended knee, serving her husband.

Anever…!!! Then when are the kids gonna get the attention they deserve nd need if we are busy kneeling for adults that want more attention than the kids they brought into this world.. where I come from, children are more important than him nd I… imagine the baby crying her lungs out while mommy is forced to ignore child, kneeling for daddy to finish eating.. 🤣😂🤣 hayi anever shem..

Commenting on the custom, Manaka said she could never see herself adopting it.

“Never! Then when are the kids gonna get the attention they deserve and need if we are busy kneeling for adults that want more attention than the kids they brought into this world?

“Where I come from, children are more important than him and I. Imagine the baby crying her lungs out while mommy is forced to ignore the child, kneeling for daddy to finish eating. Hayi, never. Shem.”

She added that she would “rather be a single mother” than take on the practice, sparking anger among some followers who accused her of being judgmental and urging her to do her research before posting.

They claimed Manaka had misinterpreted the custom and was mocking it.

“What tribe did I mention? It's okay if you kneel for him, ain't nothing wrong, nana. It's your culture, your choice. But mina I won't and you shouldn't blame me for (not) accepting patriarchy and its ways,” Manaka responded.