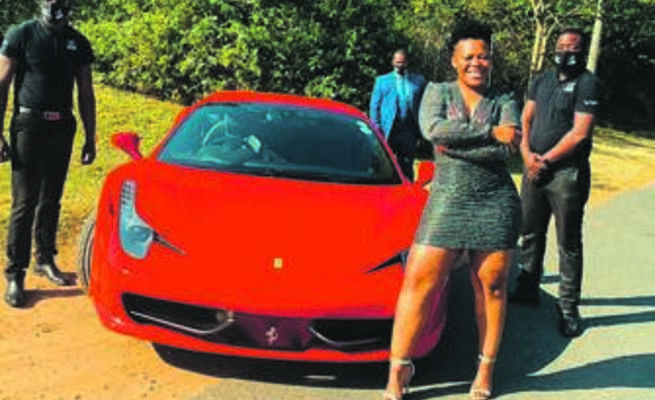 Zodwa Wabantu is all about being extra!

The Durban socialite revealed that she forked out about R240 000 to get VIP protection.

Zodwa revealed that she was planning for the Vodacom Durban July, but she had to change her plans when she heard that the event would take place indoors.

“This meant tightening security and cancelling my butterfly dress,”

“As a result I was flanked by 12 bodyguards.

“This wasn’t just for security purposes, but was meant to create hype and drama wherever I go.”

She said wouldn’t have gone all the way to hire such security if it was just a normal race.

“Greyville Racecourse is already secure. But this time I was booked all over KZN and had to make sure I was safe.

She said it came at a price but she doesn’t complain because such is the nature of the job.

“But it’s not a train smash. I’m not going to ask for a refund from Ngcebo. Instead I’m going to put the money as deposit for next year’s race.”

Zodwa said she had a second outfit which was designed by Musa Bassel and she ended up wearing that dress on Saturday.

One of Zodwa bodyguards for the day, Abel Siyesu confirmed that Zodwa paid all of them R20k for her security

“She paid each of us R20 000. Our duty was to ensure her safety, open doors for her and basically treat her like a lady.

He said they manned her from morning till late.