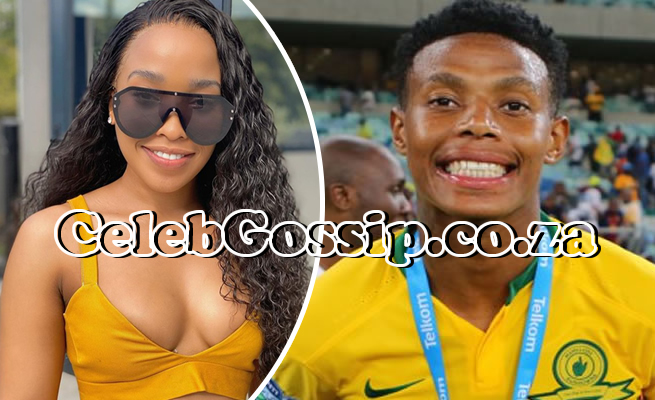 TV actress Cindy Mahlangu is rumoured to be romantically linked with Bafana Bafana and French side Amiens SC midfielder Bongani Zungu, who may be moving over to Scottish giants Rangers.

Rumours of the love affair started making the rounds earlier this year after the 27-year-old former Mamelodi Sundowns player posted flirty messages between himself and the actress.

Last week, Zungu featured the actress on Instagram Live, with the accompanying caption: “Fav me.”

He then posted a painting he had received as a gift for his birthday from Mahlangu.

The pair was also seen getting cosy while chatting on Instagram Live. During that conversation, Mahlangu asked whether Zungu watched The Queen, which she used to star in.

The football ace said he did, but Mahlangu was quick to call him out, saying: “You only watch The Queen when you are this side,” to which he teased: “Why are you talking to me as if you are scared of me? Why are you blushing?”

This week, well-placed sources close to the pair confirmed to City Press that the young couple were keeping their relationship hush-hush because the 23-year-old is still a rising star in the showbiz industry and is trying to build her own brand.

“How they met is very interesting. Bongani sent a DM [direct message] to Cindy on Twitter when he was in France last year, and since then they [have developed] undying love for each other. They are inseparable,” said one of the sources.

When approached for comment, the actress would neither confirm nor deny the rumour.

“Sorry, I have no comment,” she said. Mahlangu said she would rather speak about her role in Blood & Water, a Netflix series that follows the story of a Cape Town teen who sets out to prove whether a private school swimming star is her sister who was abducted at birth. Mahlangu plays Zama Bolton, a childhood friend to the protagonist, Puleng.

Mahlangu, who was born and raised in Standerton, Mpumalanga, got her big break on screen when she played Dumazile on Mzansi Magic’s The Herd.

Although the actress chose to remain mum on the rumoured love affair, sources alleged that they had seen the pair dining at lavish restaurants in Sandton on many occasions since Zungu got back to the country.

“They were spotted together being lovey-dovey, and one could tell that they are an item. In Sandton, it is known that the two are an item,” said a source who is close to Zungu.

Before Mahlangu came into the picture, Zungu was engaged to Khanyi Cele. He proposed to her at the iconic Eiffel Tower in Paris back in 2018. However, their engagement did not last and Cele aired their dirty laundry on social media in March last year. She spilled the beans on Instagram Live, accusing Zungu of infidelity and calling him an “easy target”.

“Bongani was so embarrassed after this mess and there was no way they would have continued with their relationship,” said one of the sources.