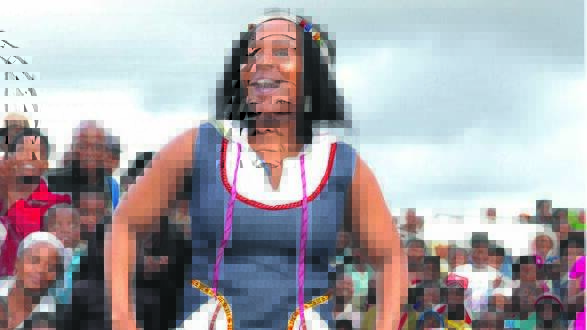 THE chickens seem to have come home to roost for Ukhozi FM presenter, Zimiphi "Zimdollar" Biyela.

The Sigiya Ngengoma presenter has been nominated in the Sebenza Women Awards in the Women in Media category.

Zimdollar is already canvasing for votes from Ukhozi FM listeners and the public at large.

In her Facebook post she wrote: Please, vote for me, you can vote as much as possible.

But Ukhozi FM listeners are having none of it. In a trail of Facebook messages they reminded her how she insulted them when they questioned SABC about their money.

As a consequence, they made it clear they would rather vote for her opponent than vote for her.

Nhlonipho Hlongwa posted: I will not waste my three fifty cents.

Asive Xhalisa wrote: I will not vote for you because you are the problem. you end up insulting us.

Senzo Momo wrote: "Who are you competing with because I want to vote for that person."

The listeners were referring to an incident where SABC failed to announce the Summer Song of the Year for 2019.

This angered the listeners, particularly maskandi fans. They demanded to know if they'll be refunded since they had already voted for the Summer Song of the Year.

The SABC did not comment on this, but Zimdollar took it upon herself and insulted Ukhozi FM listeners.

During her maskandi show she said: " . . . To those who only spent R1.50, I've got nothing to say except "ashila demed". You have a big mouth yet you spent only three 50 cents&hellip"

This fuelled more anger from the listeners. They called on the SABC to do something about it or at least force Zimdollar to apologise but she refused.

Instead, she insulted the listerners further, saying: "Those maskandi fans are stupid. They can't use their heads. I'm not going to entertain them. I just don't care.

Early this year, Sunday Sun reported on how a former SABC employee, Owen Ndlovu halted the announcement of 2019 Summer Song of the year by Ukhozi FM. Owen ended up taking the matter to court. He was accusing the SABC of stealing money from the public.

"SABC is using artists to steal money from the public,I know this because Ntencane generated close to a million but is getting nothing" Owen had told Sunday Sun.

A leader for Mthandeni Manqele's maskandi fans Mhlawuli Zikhali told Sunday Sun it would be difficult to convince maskandi fans "Zimdollar can't expect votes from maskandi fans because she publicly insulted them and failed to apologize.

"I guess she never saw this one coming, but now she needs their support."

At this point it'd be difficult to convince them because she does not seem to realize her mistake, said Mhlawuli.

Zimdollar failed to respond to SMSes and WhatsApp messages.</p>
</div>