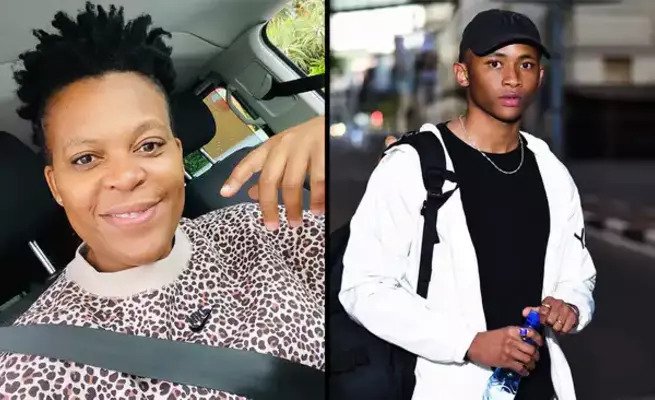 The 21-year actor, who is known for his the role of Ntokozo on Mzansi Magic’s hit series “Gomora”, posted an image of himself on Instagram donning a white hoodie and black t-shirt and matching cap, with a caption: “this worlds not for us.”

this worlds not for us 📸: @kpaparazzi_

The star nearly collapsed the internet on Tuesday when a screenshot of her “shooting her shot” with Gomora actor Ntobeko Sishi went viral.

Zodwa Wabantu has hit back at claims that she preys on younger men, and said that she will continue to date them and anyone who has a problem should try open a case against her.

The high spirited Zodwa doesn't seem fazed by the negative comments, taking her Instagram page, gloating for topping the trend list, she wrote: “ I’m number one cause I ain’t a Hashtag Zodwa Wabantu Twitter😂😂😂😂🤝 Ben 22 @gomora.”

Zodwa once said that she was not fazed by the criticism and hinted at already being in a relationship with Ntobeko.

“I have him. He is mine already. I don't take shots. I have him already.”

The star has dated younger men, or Ben 10s, in the past and said she had a type.

“I like them young. I work too hard and have money, I am having fun,” she said.

She said that her critics should leave her alone, or go to the police if they have a problem with her.

“They must leave me alone. They say that I am a paedophile or predator, but if they feel that way they must go open a case. I don't stress about my life or what people say about me.”

Responding to the criticism on Instagram, Zodwa wrote: “They (young men) go for me and if I like them I say yes.”