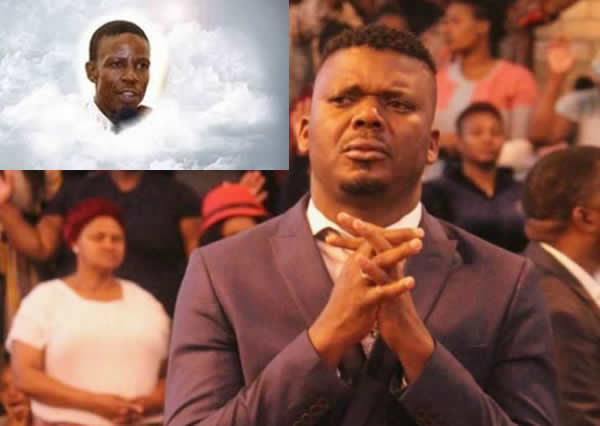 Bishop Makamu tested positive for Covid-19 a few days after his mother did.
He didn’t think he could get Covid-19 as he believed his prayers were enough to protect him for the virus.

He’s now fully recovered after experiencing night sweats, nightmares and loss of smell and taste.
He thought he was going to die. He even started dreaming about his funeral, seeing his body being lowered into one of the over a million gravesites available for Covid-19 patients in Gauteng.

It’s been 16 days since Bishop Israel Makamu (42) tested positive for Covid-19 and he has fully recovered.

The Rea Tsotella Spicey host and businessman had a hard time dealing with the virus.“It is one of the most difficult things I have ever had to go through in my life,” he says. “I was hallucinating. I lost my mind. I even saw my funeral in a dream.”

It all started when they took his mom for a scheduled operation at a hospital in the East of Johannesburg.

His mom has cancer in the womb, he tells Drum.

“We were told by the doctor that three people who went before her to do the same operation had died during surgery,” he says.

The doctor asked them to rather wait and not do the operation immediately.

“They said they wanted to test her for Covid-19 because all the patients who had died had not been tested before the operation,” he says.

“My mom was tested and they sent her home to wait for the results. When we got the results back, they were positive and she had to quarantine at home.”

A day after his mom tested positive for COVID-19, Bishop Makamu went back to work.

“I didn’t think I would get it. I thought I was healthy and okay. It did not cross my mind. I was completely ignorant about this virus. I hardly even wore a mask because I have never seen anyone close to me get the virus,” he says.

He was shooting a stokvel special on Rea Tsotella Spicey and started feeling weak.

“I was hot one minute and cold the next, but it didn’t cross my mind that I would get the virus. I believed that my prayers were enough to save me. So, I did not wear a mask,” he says. After shooting he went home.

“At night it struck,” he says. “I had night sweats and I was shaking. My wife suggested that we go test for Covid-19. I went for the test because my wife said so, but I never thought I would get it.”

His results came back positive.

“That is when things became worse for me because the virus started to play with my mind,” he says. “I felt weak. It just became a spiritual illness because it worked on my mind. The thought of me having Covid-19 was the one sinking me closer to my grave.”

He lost his sense of taste and smell. “I struggled to breathe. My mind was absent. Every single bad thing you can think of happened to me,” he says. “When I slept, I felt better. But when I was asleep, I had nightmares. I would see my funeral. I even envisioned myself sinking into the 1,5 million graves that I saw in the news. It was horrible.”

He was then hospitalised as his symptoms got worse.

“I had taken everything, Vitamin D, Vitamin C. I was drinking plenty of liquids, but the virus got to a terrible stage and I was taken to hospital,” he shares.

“The doctor told me I was at a very critical point in the illness and I would either fully recover or not make it.”

He received numerous calls from his congregants, friends, and strangers asking him to fight. “Honestly, I don’t think I would have made it without people’s prayers.”

He even received a call from Pastor Mboro, who offered to pray for him. “You know I could have been arrogant and told him I’m not one of his congregants, but I allowed him to pray for me. I was weak and unable to pray for myself and he forced me to repeat the prayer after him and I did,” he says.

“He prayed with me for three days straight and I felt my strength coming back.”

After a few days, Bishop Makamu was released from hospital and spent the rest of his recovery at home. His children and wife also quarantined at home as they had minor symptoms.

“You need to be mentally and spiritually strong to beat this thing. Listen to the doctors, follow the instructions, wear your masks, and put prayer at the forefront of your life because anyone can get this virus,” he says. “Stay safe and protect people around you by staying at home.”