The women’s league says that Ntsiki has been urged by the lawyers to never raise her voice on matters related to rape and any form of gender-based violence.

Poet and outspoken social activist Ntsiki Mazwai has received the backing of the ANC Women’s League (ANCWL) after a list of alleged celebrities rapists was released late in June.

A post naming alleged celebrity rapists was released and trending on Facebook, 22 June, as part of the #MeToo movement in naming rapists in society.

In a statement, ANCWL secretary-general Meokgo Matuba recounted how Mazwai became embroiled in the scandal.

“Ntsiki Mazwai screengrabbed and posted the list on her Twitter account and specifically said it was ‘a list of alleged rapists trending on Facebook’. It has now come to our attention that Ntsiki has received letters from lawyers of the alleged rapists.”

The law states that the naming of suspects can only be revealed until they have appeared in court.

The women’s league said that Ntsiki had been urged by the lawyers to never raise her voice on matters related to rape and any form of gender-based violence. 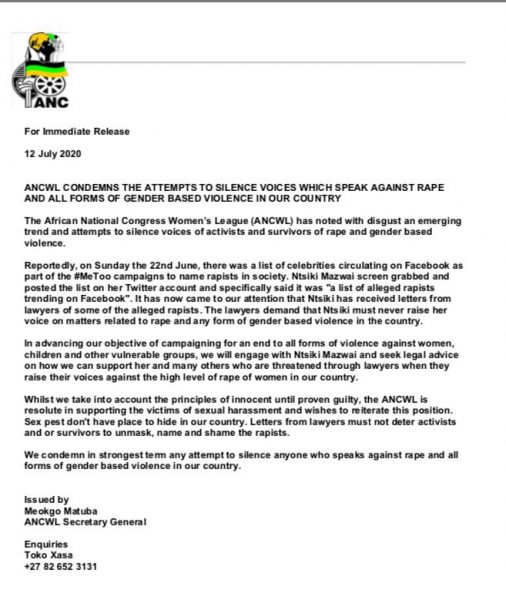 Ntsiki said: “There is an alleged rapist making his lawyers intimidate me. They are forcing me to apologise and therefore making it seem like he is innocent. And he hasn’t gone to trial so I can’t apologise for him being accused of rape. Your lawyers just called me again – I will name you.”

The ANCWL said they would contact Mazwai and seek legal advice on how they can assist her and many others who raised their voices against the prevalent levels of rape in our country and condemned any attempt to silence anyone who speaks against violence and gender-based violence.

“Sex pests don’t have a place to hide in our country. Letters from lawyers to deter activists and survivors to unmask, name and shame the rapists,” said Matuba.

Ntsiki applauded the response of the women’s league: “I call on the support of all women and society because if my voice is silenced then women are F**KED.”