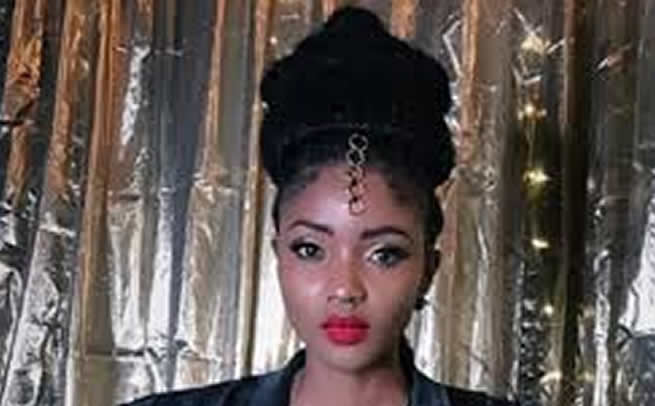 SHE’S feisty and stares death in the face every episode. Her do-or-die attitude has quickly made her a fan favourite. And her constant battle with one of SA’s top villains has fans glued to the edges of their seats, with some cheering her on while others call for her downfall.

It’s been a rollercoaster ride for Lunathi Mampofu, who plays Emma in Mzansi Magic’s hit show, The River. When she first came into Zolani’s life, played by Lawrence Maleka, no one thought she’d last long, especially once Lindiwe (Sindi Dlathu) got wind of things.

But she’s proven herself hard to get rid of and has gone toe to toe with Lindiwe – won some rounds and lost only a few.

She’s been lying about who she is, telling the whole family she’s a doctor but she’s just a con artist who can’t wait to sink her claws into their money.

She’s set on bringing Lindiwe to her knees but first, there’s a whole lot of drama to get through.

Lunathi (33) says even her mother, Nosabata Mampofu, thinks her character is going to get herself killed.

“Our parents support all of us and they watch our shows. I know that as soon as each episode of The River is finished, I’ll get a call from my mom. Umama calls me to ask me what Emma was thinking. She is convinced Lindiwe is going to kill her. I get goose bumps just thinking about The River,” she says.

Emma has everyone convinced she’s in love with Zolani and that they’re going to ride off into the sunset, but Lindiwe is having none of it.

Emma has also shown Lindiwe her true colours and has all but told her that her intentions are to overthrow her as the family matriarch.

“Playing this character is very weird for me because Emma and I are completely different. I get that she doesn’t like Lindiwe but, damn, she is rude. Lindiwe is her elder, I’d never speak to someone older than me like that. The things she says to Lindiwe make me cringe.

“Also, I am very different to Emma because I am all about yoga and treehugging, I am very chilled and she’s not.

“Emma is really all about getting that paper. She has had a hard life and is determined to live a life of luxury. She is using Zolani to get the happily ever after she wants. It is sad because Zolani deserves love. Even with the kasi vibes he has, he just wants love,” Lunathi says.

When she reads the script she gets nervous about what her character is going to do. And sometimes, she says, t those nerves want to get the better of h her. “Sis’ Sindi is always kind enough to encourage and give me tips. She is warm and always grooms us as yo young talent. And she doesn’t do it for ev everyone on set to hear her, she will p pull you aside and tell you that you are ki killing it and that you should relax. I ap appreciate her for that. She is a softie an and is very motherly,” Lunathi gushes.

She enjoys being on set with such a professional group of people who al always encourage her to do better.

“The calibre of actors on that set is amazing. No one pressures you in any way, you are carried by thespians. T There is no individualism, but everyone is focused on the production and making sure it comes out great.”

People on social media have told her they like her and it is great seeing someone give Lindiwe a run for her money, but they still think young Emma is going to die. After all, “after Lindiwe comes Kalashnikov (an AK-47)”.

“People like Emma but they don’t like what she’s doing to their Lindiwe. As evil as Lindiwe is, people love her so it’s all a big mess.”

Lunathi was born in Mthatha and grew up in East London. She’s always known she wanted to be an artist of some kind.

She first fell in love with music and drama, which led to her love of acting.

She studied at Afda and at the New York Film Academy. She’s been in Isikizi, Ambition and Ingozi. She returned to Mzansi in 2015 after her stint abroad. She’s not the only actress in her family. Her brother, Oros, is an actor in Rhythm City where he plays Banele and his twin, Prince, also studied at Afda like her.

“A lot of people know we’re related. In fact, some have asked us if we would consider doing a reality show.

“Our parents are our biggest fans, though. They are extremely supportive. Oros and I are talking about a series we would like to do together but I don’t want to get into details about that yet.”

Her priorities right now are her daughter and career.

She’s been out of the spotlight for a while but is pumped about being back.

Returning to set after lockdown has been a game-changer, she says.

“We are constantly aware of our surroundings. I was nervous to return to work because I didn’t know what to expect but we’ve been made to feel very safe. It is also great to see that everyone is respecting the protocols because we know what’s at stake.

“What has also been strange is shooting intimate scenes without physical touch. Now as actors we are required, more than ever, to use our eyes, voices and body language to show what we mean without touching.”

Her four-year-old daughter, Skye, has been somewhat of a saving grace for the actress while the country has been on lockdown. “There were days when I wasn’t feeling like myself, where I’d be consumed by anxiety and concern about finances as a freelancer, but she’s been great. On days I was not energetic enough to play and I needed alone time she understood and would just give me hugs and kisses and let me be.”

This lockdown has also given Lunathi an opportunity to get to know Skye better. While doing the telephonic interview, Skye interrupts her mom to let her know she has broken a hairband and that beads are coming out. “Look, Mama, it is pretty,” we hear her saying.

“She is a very expressive child and she lets me know her feelings and I love that. Being in lockdown with her has been a beautiful challenge.”

Family video calls to chat and pray together have also helped her.

“Every night, at 9pm, we have a video call with us five kids (and whoever people are locked down with) and our parents, it has been great. We all chat about how our days have been and we share if we are struggling with anything. Then we pray together as a family. That has been great for our sanity.”