Cassper’s Manager Offering R50k Reward For Information On Cassper’s Alleged ‘sex Video’! Casspers critics and haters are working over time but his manager works even harder it seems.

The Amademoni rapper has had to defend himself after critics came for him following the release of his latest song. Critics think it’s time for Cassper to retire as the song was a “flop”.

It was only the beginning of attacks targeting Cassper as one user went on to claim Cassper was viral video in which he was in his birthday suit. Cassper responded to the efforts of his haters laughing off their claims.

“The extent they will go to to lie on my name has reached a new level today.. I’m sitting here laughing in extreme shock… eseng Yana gents. Le ya go ya tronkong for Masepa honestly. Lol, bathong ba modimo! Jail time coming too,” Cassper tweeted.

Cassper’s manager took it further offering a R50k reward to anyone with information that could lead to the successful arrest of the person who initially tweeted the fake video.

“R50 000 reward to anyone that can lead to the successful arrest of the person that created the acc that’s spreading the fake video. Completely

anonymous, you wont have to testify at all. All we want is proof that the person owns the handle. Btw Twitter HQ working on this. 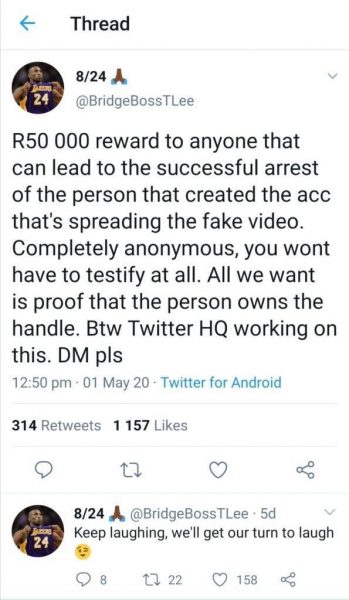