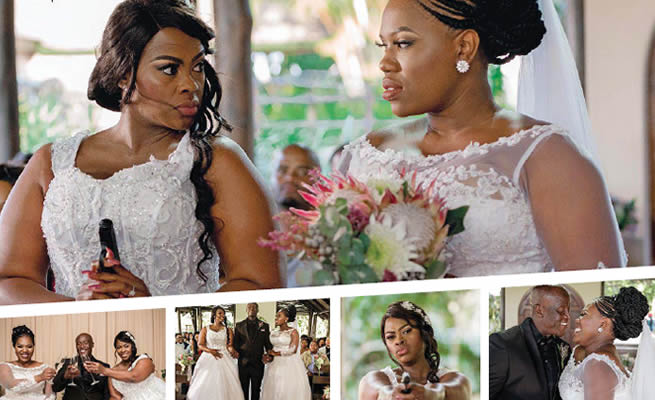 The SABC has shelved plans by drama series Uzalo’s producers to continue shooting this week. The permit its production company was granted is yet to be revoked by the department of trade and industry.

Stained Glass TV, the company which produces Uzalo, was granted a permit by the Company and Intellectual Property Commission (CIPC) allowing it to shoot the popular drama series. Permits are granted to essential service providers.

With only enough episodes to last until May 8, the company thought it had scored big when it was given the green light to start shooting. However, things fell apart after City Press asked the SABC and Stained Glass TV – owned by Gugu Zuma-Ncube and Pepsi Pokane – why the production house was granted permission to work during the lockdown.


Uzalo, which is shot in KwaMashu in Durban, is the most watched drama series, with about 9 million viewers. But following the questions by City Press, the SABC halted the shooting and asked Stained Glass TV not to proceed until after the lockdown ended or when certain regulations had been relaxed.

The SABC allegedly told the producers that they had to make a special request to resume production. It is now understood that a consultation between the company and SABC1 will take place soon to determine whether or not the show will be given the green light.

This week, the department of trade and industry, under which the permits are issued, distanced itself from the saga. Spokesperson Sidwell Medupe said the CIPC had granted the public broadcaster the permit to continue working during lockdown.

“This is a matter between the SABC and all the companies contracted to the SABC. The CIPC is automated and it is the company’s responsibility to check if they comply with the regulations before they even apply for a permit,” said Medupe. “Most companies were granted permits. However, as the department, we reviewed all the applications and when we found that the company was not an essential service we revoked the permit and sent an email to alert the entity.”

He added that only companies that were permitted to work, in terms of lockdown regulations, would be allowed to continue operating through this period.

“Possession of a CIPC certificate doesn’t constitute a permit to operate during the lockdown. Any misinterpretation of information is a criminal offence and will be prosecuted,” he said.

This week, SABC insiders told City Press that the public broadcaster’s board was still considering which production houses should continue working during the lockdown.

However, some of the production houses accused the public broadcaster of giving Stained Glass TV special treatment.

“Is this happening because Gugu is the daughter of former president Jacob Zuma, and this is the reason her company is given preference?” asked an SABC insider.

Pokane said they were looking forward to going back to production, but added that they respected the SABC’s decision.

“As Stained Glass TV, we applied for a permit on the CIPC system [website] and this is how we were awarded a permit. This is after we realised that we have limited stock for our viewers as we don’t have new content for them as from May 11,” Pokane said, adding that “predictability and consistency are important for our national psyche”.

“Stained Glass TV is the largest TV production employer in KwaZulu-Natal. Uzalo employees took their annual paid leave during the initial 21-day lockdown period, but the period ended on April 17,” he said.

“In the absence of significant Covid-19 economic support [relief ] measures, the employees and service providers will lose their only source of income. In a province with a limited amount of TV sector activity, the negative socioeconomic effects are significantly more pronounced than they are in Gauteng or the Western Cape.”

Pokane explained that, as a production house, they had put precautionary measures in place to make sure the production staff and their families would not be exposed to Covid-19.

“In terms of protective measures, we are obsessively committed to doing everything we possibly can. We are working with a medical doctor and health and safety personnel, who helped draw up the operating measures and will be involved in ensuring compliance.

“Those measures include keeping crew numbers at a minimum, shooting only in the studio or at a controlled location and catering consisting of packed meals. Most importantly, transport will be provided to crew and cast to ensure that no one has to use public transport.”

Acting SABC spokesperson Mmoni Seapolelo said all productions would remain closed until a collective decision was made on when such work could resume.

“However, when such a resolution has to be taken, it will be a decision based on [the interests of] not one but all production houses.

“It is worth noting that the SABC is operating to ensure full compliance with lockdown regulations,” Seapolelo said, adding that the health and safety of their employees and production houses remained a priority.

Weighing in on the saga, Jack Devnarain, chairperson of the SA Guild of Actors, said that, based on the available facts, his organisation was not aware of any other soapie that enjoyed essential service status.

“However, we have no doubt that both the CIPC and the SABC have considered the application of Stained Glass TV with due consideration in terms of their respective mandates.

“We hope to see other series awarded the same status in due course,” Devnarain said.

He added that it was clear both the SABC and the CIPC saw the value of continuing the TV productions as an essential service and this bodes well for efforts to provide relief to freelance actors and crew members who have been left with no income during the lockdown. “We hope Uzalo takes full advantage of its essential service status and returns to production soon,” Devnarain said.

Is this happening because Gugu is the daughter of former president Jacob Zuma and this is the reason her company is given preference?