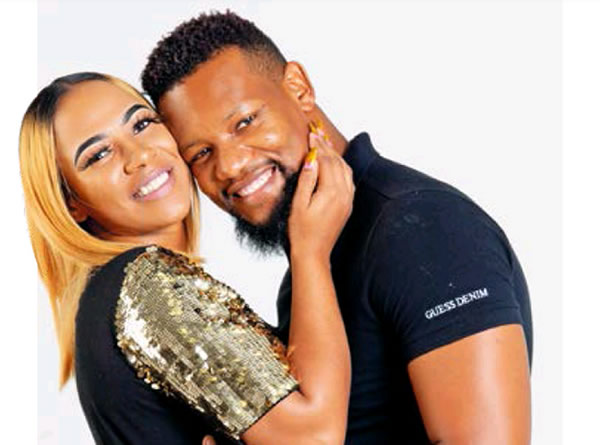 He is amoung one of the sexiest men in Mzansi, and the kind of a man whose presents is felt when he walks in a room, Kay Sibiya populary known as Ayanda in SABC 1 Uzalo takes time to let us in on his private life….

Like many would be curious to know, Is he taken?, who is the lucky woman in his life? The actor is smitten with girlfriend Judie who is the mother of their 8 month old son Doxa

Kay (32) who  played Ayanda Mdletshe in Uzalo, also features in the Netflix drama series Agent as football agent Blaze, The show recently also aired on SABC1 and is all about the business side of soccer. but fans still call him Ayanda. Being in the limelight means lots of attention from fans and women are always trying to get him to notice them. However, the good thing is that he has eyes for one woman only, Judie, his long time girlfriend, Judie says she’s very secure in their relationship.

Judie, a makeup artist, a DJ, an influencer and a businesswoman has found true love, she is not worried that her charismatic man is exposed to many women, she trusts him.

“I am not in the limelight and I don’t want to be. That’s his space. When we got together he was in the entertainment industry and that’s not something I want to change. I will admit, though, that I am a jealous person. Very often girls make moves on him and I can’t stop them. What I appreciate is how he handles it. There will always be girls, but he respects me, our relationship and our family. He lets the girls know he is not interested," she said.

He is one person who knows how to leave 'work at work' and 'home at home.' “The other thing I appreciate about my man is when he is away, he is gone – but when he is home, he is really present and is involved 100% in the children’s lives,” she added.

Judie went against the tide and societal stereotypes when they met.

“We met at an event and I saw him from across the room. I really liked his height and so I went up to him and told him as much. Initially I didn’t recognise him, later I realised who he is. I introduced myself by my middle name, Sbahle, because I thought he was a traditional Zulu man,” she said, giggling.

The two have nothing to hide from each other, they exchange phones with no strings attached, they share social media handles and Kay said he couldn’t be happier, he plans to marry Judie one day.

“I wholeheartedly believe in the institution of marriage. I also believe there are special kinds of blessings that men never receive when they are not married. That is why the Bible says it’s not good for man to be alone. That is also why it says, ‘And so a man shall leave his mother and father, and cling to his wife’. There’s something sacred about marriage and I cannot wait to get married. Specifically, I can’t wait to marry Judie,” he added.

When Drum magazine visited the couple, the two made the interview look tension-free and a bit informal by being pleasant and making jokes.

“I travel a lot because of my work so when I’m in town, I really just want to spend time with my family. Sometimes I tell her not to worry about the kids, I will look after them and she must go and do something fun for herself," Kay said.

“I want to break the stereotype that Zulu dads can’t be affectionate towards their children. For me, Kay Sibiya is a persona and when I’m not on-screen, I am Khumbulani and I am able to be the man my family needs me to be,” he said.

They have three kids and Judie has an eight-year-old girl, Kay has a five-year-old girl and together they have Doxa. 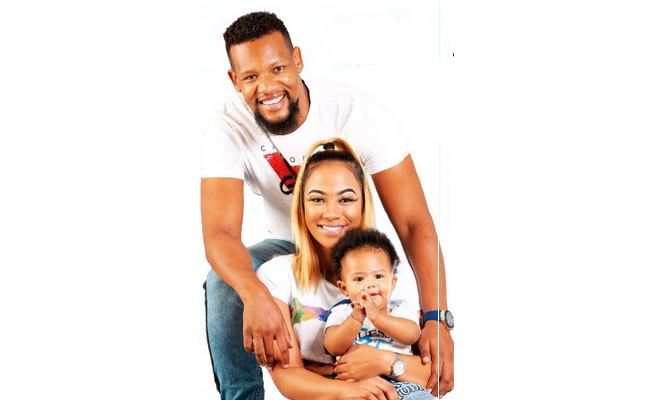 Judie (25) is happy for the support she gets from friends and relatives. Without a supportive family, she wouldn't have managed as a working mother.

“My parents were never married. That solid foundation is something that I would like to have for myself and our children,” she said.

Talking about his career, Kay's first love was not acting, he wanted to be a TV presenter, but fate had other plans for him.

“I decided to get into acting because I wanted to improve my presentation skills. I knew actors had skills I could use in presenting, like thinking on my feet, minding my body language and increasing my confidence. Before I knew it, I was in love with acting and there was no going back,” he said.

He has great respect for the Uzalo productions for giving him the platform to showcase and perfect his skills.

“It was the biggest blessing for me. I can tell you now, being on different productions and channels is great but prime time on SABC is life changing. What being on SABC prime time can do for one’s brand is unmatched and I’m glad I had that. All the big names in the industry started their careers on SABC and have gotten better from there,” he said.

In Uzalo, Leleti Khumalo played his mother and she was instrumental in boosting his self-esteem and confidence. “And I would pinch myself every time something like that happened and ask myself, ‘Does Mam’ Leleti Khumalo really want to run lines with me?’ I mean, I grew up watching her and now she knows my name," he said.

“Bab’ Samson Ndlovu played my father and they took every opportunity they had to teach us and to guide us. Unfortunately, not all of that can be passed onto the ones that have come after us in the industry. A lot of guys don’t have the eagerness to learn. They know it all and come to set with an attitude of focusing on the number of social-media followers they have,” he added.

He is very happy with his current character, Blaze.

“I have been playing strictly isiZulu-speaking characters and now people can see another side to me. A few weeks ago I was at Montecasino and a group of young men came to greet me and when I responded to them in English they were shocked because they didn’t know I could speak the language. It was a very funny encounter,” he added.