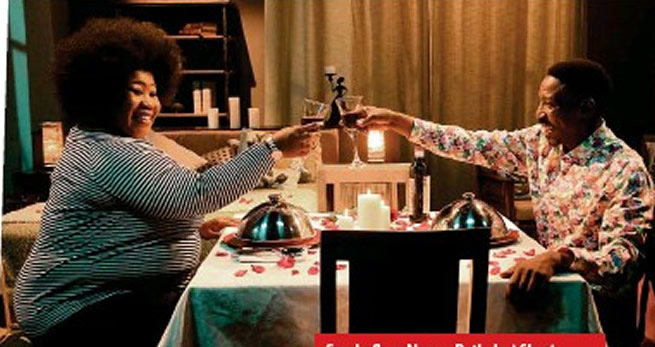 Stolen water is said to be sweet and bread eaten in secret is said to be pleasant, such is the case with forbidden romance, the Generations' Nomsa Buthelezi-Shezi and Ronnie Nyakale’s would tell you.

Their love affair seems to have been born out of convenience and therefore unplanned, however, despite that, they are not ready to let it go. Not even the fact that they are family through marriage, The Legacy’s characters went against the tide and just did fall in love, despite questions regarding their relationship.

This followed months of living under the same roof. Boipelo (Nomsa Buthelezi-Shezi) and Cosmo (Ronnie Nyakale) are madly in love, despite the odds against their relationship.

They are not even ready to listen to naysayers, all that is important to them is their own understanding and love for each other.

“It is very simple: your story is with your man, not anyone else. Those who have an opinion about your love life, set boundaries for them. Love is love, it does not have colour or shape. At the end of the day, Boipelo is in love with this man so what must happen?” Nomsa said.

The background of the matter starts in 2019 with Nomsa, Our Perfect Wedding’s host, joining Generations: The Legacy as Mrekza’s (Kope Makgae) sister.

As fate may have it, then the set goes like this, she moves in to live with her brother; his wife, Lucy (Manaka Ranaka); and Lucy’s brother, Cosmo.

Love is sometimes so tricky and hard to see coming, at first Boipelo felt nothing was in the making between them, he seemed not to be the type of person she would fall for. But when he opened out his heart, she quickly noticed how much she loved him.

“When I saw where the writers were going with this storyline, I started praying,” said Nomsa, who is a lesbian in real life and got married to Zandile Shezi-Buthelezi, last year.

She was thrown in the deep end, in one of the most challenging roles. Because her background as a lesbian, playing a woman in a relationship with a man was a tall order for her.

“It has been a while since I was with a man, especially with having to kiss a man. Now I must feel a beard on my face,” she said jokingly.

All her worries were made easier and bearable by the type of man she played alongside, his sense of humour and funny character worked in her favour.

“He had this silly excitement about it, like an I-got-you kind of attitude. I remember there was a kissing scene we had. Ronnie was ready, he used mouthwash and smelled like a clinic. He made me very comfortable,” she said.

In a bid to show his love for Boipelo, Cosmo goes at length in order to steal her heart. Nothing could stand in his way.

“He is the kind of character who wants to make a woman feel like a queen. He has no problem with digging in his pockets. I mean, that’s what men do and should do. A woman wants to be spoilt. As a little boy, things like buying a girl you like a lollipop. It is this 50/50 that’s ruining things,” Ronnie said.

The two being somehow family relatives, Lucy is against their romance and did all she could to stop their affair. When they spent R7000 on a romantic outing, she viewed it as wastage and reprimanded them for it.

At one point, Boipelo told him to prepare a perfect dinner for her.

Nomsa said, “Boipelo thinks she is Naomi Campbell, like Cosmo isn’t her type and she can get any man. But the idea of being with Cosmo makes her feel genuinely loved.”

The love between them grew with each passing day and Nomsa urged her in-laws to mind their own business.

“A woman wants to be spoilt. Which woman doesn’t? It is a love language a woman appreciates and understands well. The notion that as a woman if you ask me for anything, you are a golddigger is a lie. Women want to be spoilt. That’s it,” she added.

As a result of his love for her, Cosmo will not succumb to pressure trying to tear them apart.

“Cosmo now has to make his own decisions and trust himself on this one. Even though his sister is overprotective, he knows she has his best interests at heart,” Ronnie said.

Lucy is not impressed, looking from a distance while contemplating her next move.

“In-law issues are a problem to so many people. When a makoti comes into a family, there is this thing that they think they have power over them. For her to have that surname you must listen to whatever they say," Nomsa said.

Meanwhile, there was a limit as to what Lucy could do and she was kept at bay.

“If Boipelo was soft it was going to be a disaster. Lucy would be controlling everything. Women need to stand their grounds. They should not be willing to do whatever to feel accepted into a family that wants to disrespect her,” Nomsa added.

“You just never know what the writers are thinking. All you can do is stay true to the character and execute what the storyline dictates,” said Ronnie.

For Ronnie, The Legacy had become his home away from home after being part of the SABC1 soapie for six years and as a drive-driver he was excited to play Cosmo.

In the same light, he is very happy with how people react when they see him in public. “I wish I could have a camera in my car to capture people’s reactions when they see me,” he said.

“I went to pick up an Indian man at the airport the other day, he was like, ‘Cosmo, do you know how much I spend on YouTube just watching you?" He said.

Just days ago I was stopped by two white grannies who called me Cosmo and even asked where Lucy was.It has been months since I started being a driver and I must say, I would not know the impact Cosmo has had had I not taken up this job. It is really nice to see that your work is appreciated,” he added.

Despite the show's ups and downs, Ronnie stayed true to his actions.

Away from the camera lenses, Nomsa is living her perfect life. While others were struggling in different scopes of life in 2019, she had a blessed year personally and professionally.

“Some people think when you are full-figured you must be a brand ambassador for chicken. Like a full figured woman can’t be associated with beauty but with pizzas only," she said.

She has managed to live to her billing.

“Many ask how I am able to be this confident and solid in who I am. Well, I created a bubble of who I am, and I don’t let anyone convince me otherwise. People will tell you how ugly you are and about your kiss-kiss, knock-knees. None of what they say matters unless you believe it,” she added.