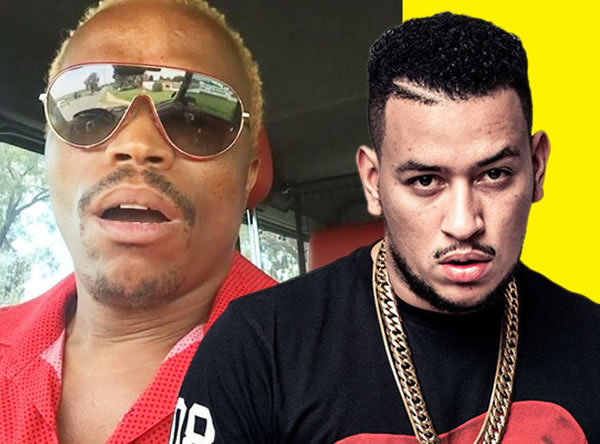 By all accounts AKA seems to be a troublemaker, from crosing swords with fellow artist, Cassper Nyovest, swearing at his parents to a homophobic slur, many would love to believe he has just ventured to far from the shore and would drown.

As if to end his beef with Cassper, AKA is challenging him to the boxing ring, lambasting him along the way for not signing the contract for the bout set for September this year.

Some would say a good name is better than riches and not even a fat balance sheet would substitute good character, others would add. As for AKA, they think he is a bad karateka who goes out in the streets picking up fights.

It is not only his beef with Cassper that has seen many drawing out swords against him, his latest rant, that included a homophobic slur, it the straw that broke the camel's back, he may have gone too far, social commentators and even some close to him say.

AKA and Casspers are slowly graduating into being sworn enemies, with a longstanding feud spanning four years now, they mock each other at the slightest opportunity, beefing over every item from who has the most hits to who owns the best cars.

Most recently, AKA rekindled the rivalry when he teased Cassper for not putting his hand on paper, to ink a boxing contract. Posting a video of him punching boxing bags in a gym, AKA called Mufasa out for not accepting the offer.

“Sign the papers you short stubby piece of dog s**t,” he wrote.

Cassper held his guns and remained silent, but this did not go down well with AKA and he went further as if to raise the anger in Cassper, he tweeted;

His sentiments saw him being attacked from left, right and center, with many not happy about his choice of words especially the 'stop being a moffie' slur. However, AKA is refusing to swallow his pride and adds that he will stand by his words.

“Why should I hold back?” he told DRUM magazine. “I’ll never conform to what people want me to be. People who know me understand what I’m doing, and I don’t need to explain myself,” he said.

His comments have earned him more enemies than friends, even former friend Burna Boy and DJ Zinhle’s BFF, Pearl Thusi, chided him. Not only them, his homophobic slur attracted outrage from various quarters.

“The word ‘moffie’ is a very derogatory Afrikaans word used in queerphobic hate crimes,” said LGBTQ activist Yaya Mavundla. “You would expect a person in AKA’s position to not be clouded by anger to the point of using words that take our country backwards,” Yaya told DRUM.

Yaya thinks his comments would have far reaching implications and said; “We are slowly learning to accept each other’s differences in race and sexuality, and we need celebrities and people in the limelight to be a good example because they have a wider reach and bigger influence.”

As if to extinguish the fire, AKA indicated that he was sorry to have made such comments. “At some point, I thought it wasn’t a big deal to use this word. I understand now that it’s not acceptable,” he wrote on social media.

His apology came a little too late, as if it were a perfect dish gone too cold to enjoy. Blogger and reality show star Lasizwe Dambuza called for fans to disassociate themselves with him and to cancel their support of the rapper.

“The fact that you could use that word so vulgar and loud! Speaks volumes. As a member of the LGBQT+ community I am still highly offended by your choice of words. I’m praying for you man! Heal bro!” he wrote.

AKA recently courted some controversy when he showed off his new girlfriend after his break-up with DJ Zinhle, many wondered if he was trying to hurt DJ Zinhle's feelings. While others thought he was under the influence of drugs, but a close friend doubted.

“I’ve worked with him for years,” said a source close to the rapper who however, thought he had gone too far. “I’ve heard drug stories but I’ve never seen him put anything under his nose. We understand Kiernan’s personality. We accept him, he is harmless fun. But this time he overdid it.”

A colleague says AKA is acting out because he’s bored. “He is happy to be the topic of discussion,” he said.

“This is all a big game for Kiernan,” added yet another source close to him.

“This guy only cares about making money through the fight and beating the s**t out of Cassper. I support him,” said the friend, who requested not to be named.

“He is perfectly fine. He isn’t going crazy. All I know is he’s been partying a lot, drinking more. A lot of the stuff he did when he broke up with Bonang. I don’t know what happened with him and Zinhle – he isn’t ready to talk to us and that’s cool. All we know is they’re not on speaking terms at the moment, but they’ll be fine. I mean, his mom is with Zinhle almost every day and he hates that,” added the friend./

DJ Zinhle declined to comment. “You can ask me anything about work, not other people’s business,” she said.

Another friend said AKA was behaving that way because of boredom. “That’s why he’s carelessly dating,” the friend said. "But Kiernan is a good guy, man,” he added. “He just lets his mouth get the better of him.”