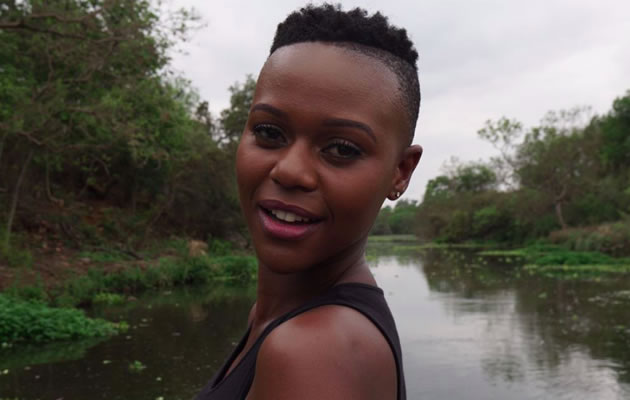 The Mzansi Magic's The Queen is one of the most sought after soapies, most TV lovers are forced everyday to stick to their seats, it is not only that fans have over the years fallen in love with the show, but it has never run short of talents too.

The show boasts some of the most big names in the local entertainment sector, as if that is not enough, the show continues to lure new talents both upcoming and veterans.

The latest star to join the soapie that has stood the test of the times is Sibusisiwe Jili. She plays the very popular character of Georgina (GG) Zulu, meanwhile, the process of her joining the show was not a toll on the park, she described her auditioning for the show as terrifying.

GG is the eldest daughter of Petronella played by Thembsie Matu and a warrant officer who had just been transferred from the Free State Mjekejeke (Sipho Manzini). GG then became a police officer, as a last option because of scarcity of jobs. She works alongside Vuyiswa Jola (Zandile Msutwana) at Thebisa Police station.

She can blow both hot and cold, although she is sometimes soft, cool and seemingly vulnerable, she can be hard and aggressive when it is required.

"She is a hard worker goal-getter and most importantly loves looking good all the time with her weaves and nails on point. Although she can be seen as a slay queen, she can change it up and be aggressive when needed. She clashes with Vuyiswa who thinks she would be a great cop if she takes her job seriously," Sibusisiwe said.

"I have been praying and meditating for a character such as GG on The Queen. Obviously I never knew what to expect, but here we are. The days on set are chilled mixed with beauty that motivates me to bring more life into the character," she said.

She shares the same freedom of expression with GG, always ready to speak her mind without any fear.

"I make friends friends easily if and when I choose to and I just want to experience people in their true forms there is a lot to learn from that. I am fairly silent most of the time because I am an observer which makes it easier for GG to come alive," she said.

Sibu was very diplomatic not to pre-empty the plot of the show, she wanted people to grow that appetite to watch for themselves. Her hints were enough to arouse some interest among fans. She came into contact with the Khoza family and Dingane got attracted to her.

"It is still too early I found GG as the type that appreciates people that boost her confidence so I don't think she will take things far in terms of associating herself with the drug as a cop but she is open to compliments," she said.

She is an actress and singer and she claimed fame from her role in Isibaya as Zanele playing the club manager; "For now I am enjoying this blessing and continuing with my music," said the actress who has also grown spiritually.

"It has tested me in many ways that he pushed me to a point of knowing thyself," said Sibu who had no initial plans of becoming an actress, but is now happy of the chances that come along with it.

"Learning and forgiving myself played a key role in my growth. There is definitely more to come and more to learn," she said, adding that surprises are part of the fun and that she is ready to go on with a peaceful mind.