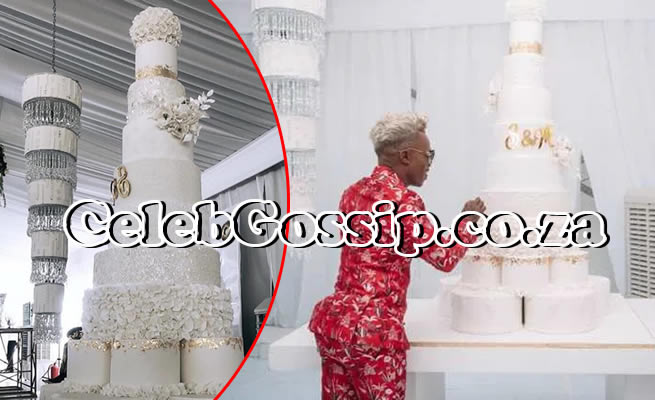 Now that episode 4 of 'Somizi & Mohale: The Union' has been streamed on Showmax, viewers can't seem to get enough of the couple's not one, but two wedding cakes.

According to Somgaga, it was actually Mohale Motaung, who made the most outrageous requests for the two one-of-a-kind creations.

“When they came in for their cake-tasting, Somizi told us he wanted an upside-down wedding cake for their traditional wedding in Kibler Park,” said Kelly.

“We created two upside-down cakes for Somizi that were five tiers each and suspended from the ceiling. Between the two hanging cakes was Mohale’s cake, that had 10 tiers. Each tier was a different flavour and the flavours they chose were Crème Brule, death by chocolate, coconut and lemon, salted caramel and whisky, and Amarula.”

The cakes were covered in fondant icing, all-white with edible gold leaf, added Kelly, who has been running her baking business for the last nine years from their studio in Northlands Decor Park in Randburg.

THE CAKE FOR THE WHITE WEDDING

“The colour scheme for Somhale’s wedding in Muldersdrift was all-white, and the cake had to match,” said Kelly. “Somizi wanted the cake to look like it was floating in the air.”

The nine-tier cake was suspended in a Perspex box for all 240 guests to see.

So, how do you cut and serve a wedding cake that’s in a floating box? Apparently, there are all sorts of trade secrets at a lavish wedding like this one.

Kelly confided that the wedding cakes are always transported to the venue in separate layers before they are assembled on-site. There is a separate cake kept in the kitchens – all the same flavours and frosting chosen by the couple – that’s served to the guests after the official cutting of the cake.

There were no old-fashioned cake toppers on the wedding cakes, but the couple did have their initials in gold on top of the cakes for the traditional wedding.

Kelly estimated that it took 15 people to make all of the cakes, both those on display and the cake served to the wedding guests. If she had to guess, they used well over 1 000 eggs.