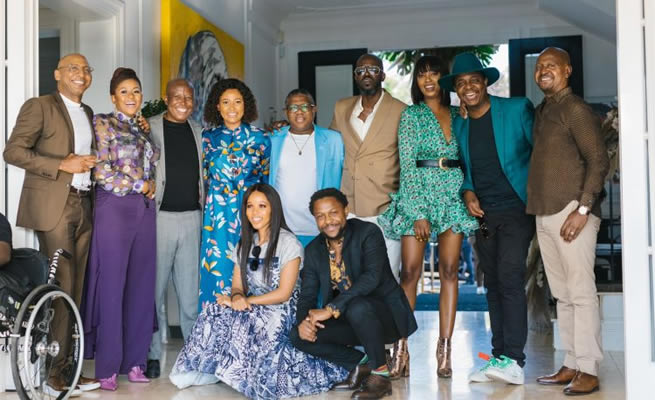 On the 11th of March 2020, DJ Black Coffee turned 44 and he celebrated his day in one of the most spectacular ways, he took time to set aside everything that rocked his private life in the past few months and hosted a well attended luncheon.

Mzansi celebs, politicians, close friends and relatives came in their numbers to celebrate his special day with him and wished him all the best on his future endeavours.

Hosted at a private location, the event was one of its kind in that it was not just well attended, but it was star-studded with some of the biggest names in the Mzansi music, film and TV fraternity.

It was characterised by tables full of food and drink amid the most fashionable guests, music filled the wind that blew, among the guests who graced the event included a number of news makers.

Black Coffee boasts of an industrious career spanning 15 years in the industry and recently shared that 15 years ago he was struggling to pay his rent and make ends meet. He said having faith in his craft was what got him through.

“We want more! 15 years ago around this time, while struggling to pay for rent and to make ends meet, I was [unofficially] working on this remix of this gem by Thandiswa Mazwai, originally produced by the King Don Father, Spikiri Mandla," he recently said while celebrating his 15 years spinning the turntables.

He added that he was stuck with no direction: “I didn’t really have a plan or a contact on how to submit it to the label so it could be official, but I continued to work on it with so much faith that these big artists will eventually hear it and approve it for release.”

Fifteen years down the road, he is one of the most sought after artists, honing his DJing skills and hoping to be recognised by big names, Black Coffee shared that he got his break months later with help from the “legendary music guru” Oskido.