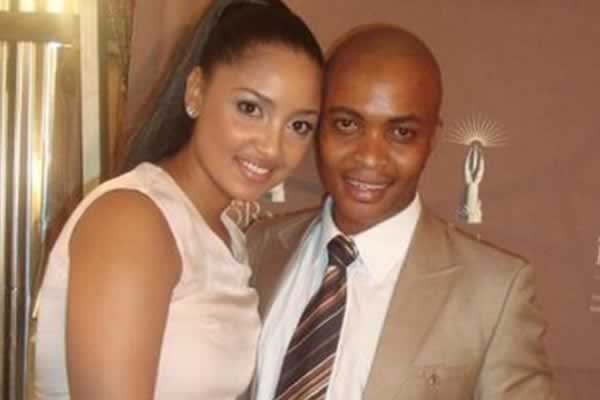 FIRST it was comedian Trevor Gumbi and his wife Lucille, followed by former Metro FM DJ and singer Unathi and husband Thomas “Bad Boy T” Msengana – and before long singer Zwai Bala and wife Melanie had joined the ranks.

Break-up season among South African celebs seemed to be in full swing – and now another couple has confirmed they’ve called it quits, stunning friends and fans who thought they were the one pair who’d go the distance. But it wasn’t to be. Jo-Anne Reyneke and Thami Mngqolo’s picture-perfect relationship is officially over. The pair shared the sad news in a joint press release recently in a bid to “prevent any false speculation” about the state of their relationship.

The couple never married but they’d been together for almost 10 years – a union that produced two children, now aged five and three. Splitting up was the right thing to do, they say in their statement.

“Though we have strived to transcend the rigours of armour during our time together, we have fallen short. We have been blessed with two beautiful children together and will continue to raise them as corresponding units.”

The couple reportedly made the decision after Jo- Anne ( 29) found a “compromising video on Thami’s cellphone”, according to sources.

Speaking on condition of anonymity, a friend of Jo-Anne’s says that signs of trouble had been around for a while and Jo-Anne is still learning to adjust to the separation.

“We knew something was wrong because we hadn’t seen them together for a while. They even stopped attending social gatherings as a couple like they used to. The only time I saw Thami was when he was out and about with the children.”

JO-ANNE comes across as calm and relaxed when we speak to her over the phone.

She’s not going to talk about her relationship, the former High Rollers actress says, as her top priority is to protect her children.

“This is my life – my personal life – and it’s a serious matter we’re still dealing with.”

“It’s no secret Thami and Jo-Anne are no longer together. There’s a lot that has been happening, but I’m in no position to speak about this.”

But Thami’s publicist, Hlengiwe Mbambo, tells us it’s been rough.

“Thami isn’t coping well with the break-up – he’s torn up. Imagine breaking up with the mother of your kids and a person you’ve been with for years. He’s not taking it well, but he’s surviving one day at a time. The two have decided they’ll not go into detail about the break-up until they’ve dealt with it. They’re really trying to move on.”

Still, there are signs the pair is trying hard to remain friends for the sake of their two children.

On Mother’s Day Thami (35) posted a picture of their kids and expressed his appreciation for his ex.

“Thank You for the gift of life @joannereyneke. Happy Mother’s Day. #EternallyGrateful #EternallyBlessed,” he wrote.

While Thami and Jo-Anne have tried their best to keep their relationship private over the years, they’ve had their share of ups and downs. In 2013 Jo-Anne left the family home but moved back in with Thami after a few months. This drama came after Thami was accused of cheating on Jo-Anne and a Johannesburg banker tried to extort R100,000 from him after he allegedly caught the actor with his girlfriend.

But Thami, best known for his role as Senzo on Generations, was adamant he had done nothing wrong. “She’s just a friend I have known for three months,” he said at the time. Yet it seems the picture- perfect romance the beautiful couple once had had been damaged.

Trust is hard to earn back after it’s been broken, says Hlengiwe Zwane, a Johannesburg-based clinical psychologist. “It takes a lot for a couple, especially one in the public eye, to mend a broken relationship. Couples whose relationships are in the public eye face a lot more pressure and scrutiny and require a really strong bond to weather any storms. They also need to trust each other implicitly.”

“There are pressures to try to keep up a certain identity and status. Expectations are high from partners and there might be competition for work at times – and if one party is not secure in themselves and secure in the relationship the union might suffer.”

THAMI and Jo-Anne met in January 2009 at a party hosted by a mutual friend. He was there with someone else while Jo-Anne was with a girlfriend.

“I mean, she’s gorgeous! We got talking and I thought she was a really cool chick . . . and extremely hot! I was flirting my ass off!” Jo-Anne told us at the time. “I was giving him some of my best moves, but he didn’t seem to notice. I brushed his shoulder, laughed at his jokes and hoped he’d ask for my number.”

It wasn’t long before the pair had moved in together and they were soon one of SA’s “It” couples.

The trouble started when Thami left his long-running role as Senzo on Generations, one of his friends tells us. He was fired along with 15 other actors in 2014 after they demanded pay increases from producer Mfundi Vundla.

Soon reports of a financial crisis dogged Thami, with tabloids splashing the news his Audi had allegedly been repossessed because he failed to pay the instalments. Money woes took a toll on his relationship, the friend says.

However, Thami appeared to be getting back on his feet when he landed the role of Jonga on Mzansi Magic telenovela Igazi. But this didn’t last long.

“Thami was unhappy about the money he was getting for Igazi and [the show’s bosses Shona and Connie Ferguson] adjusted his salary and they signed a new contract.”

On the day he was meant to start filming Thami allegedly refused to shoot until his payment was raised again. “That made the bosses furious because they had agreed and for him to complain about it on the day of the shoot delayed production. He was then told to leave and he was replaced by Andile Nebulane in season two.”

Since then he’s been noticeably absent from the small screen. But it’s because he’s been busy, Mbambo says. He’s currently juggling a lot of work, running Lendeka Media, a production company for TV and radio, as well as being the president of Touch Rugby Sundays, an event for rugby lovers that raises funds for community projects. He’s also partnered with Mbambo to run the public relations firm GOT PR. Jo-Anne on the other hand is currently working on a project in Durban. In their statement the pair stresses they’re trying to move on with their lives.

“We’ve taken positive steps forward. This is a difficult transition for us and our children, and we would appreciate it if everyone respected us during this time.”