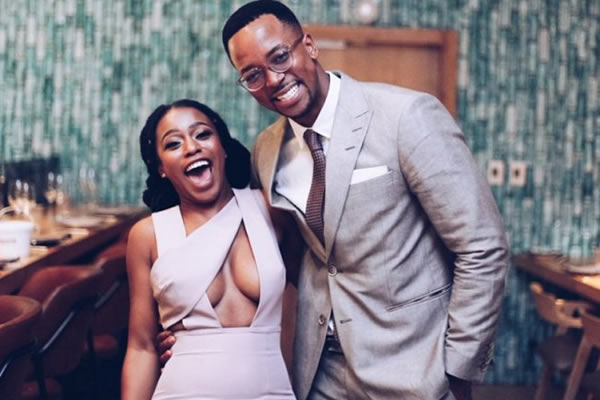 Many speculated that he cheated on the actress and she was tired of keeping quiet about what went down between them.

A seemingly innocent picture between Maps Maponyane and a fan has irked his ex-girlfriend Nomzamo Mbatha.

The drama started when Maps shared several pictures from a recent event he attended. One of the images showed him hugging a woman whose face could not be seen.

“Oh my God I was praying for you and Nomzamo to get back together. My prayer has been answered my favourite couple,” one fan commented.

But the Buns Out founder was quick to set the record straight. “Nah that’s just @leddi_g,” he replied.

The handle he provided was for an influencer named Naledi Radebe, who looks nothing like Nomzamo. She was also tagged in the picture.

With that settled, everyone moved on with their lives until Nomzamo spotted a story about the incident on her Twitter timeline. The post read: “Maps and Nomzamo not back together, confirmed after fan jumps the gun.”

The actress retweeted the post with a shocking warning aimed at Masego, aka Maps.

“Not now. Not ever. Masego, stop taking advantage of my silence and choice to be graceful through it all. Shake this can one more time and I’ll open it. @MapsMaponyane you made your bed. Lie in it,” she wrote.

Maps was seen giving this lady a hug then his fans thought that lady was Nomzamo,then Maps corrected the fans by tagging the right lady…then Zamo said this👇 pic.twitter.com/ATqpDkZkRW

Nomzamo and Maps both started trending on Twitter with many tweeps weighing in on the drama.

So Maps is being threatened for just tagging the right person, imagine if he didn't tag the right person and left it as it was speculated,he'd still be wrong to do so….Nomzamo must continue to be graceful through the pain,we don't need another celebrity drama.

I hope #nomzamo woke up this morning feeling embarrassed, because wow sis 😳 that was totally unnecessary, listen I feel embarrassed on her behalf pic.twitter.com/GUZz7yd8iP

Some Twitter users were more interested in what Nomzamo had on Maps. Many speculated that he cheated on the actress and she was tired of keeping quiet about what went down between them.

Nomzamo has since deleted the tweeted but her fans think she had every right to put Maps on blast.

Obviously there is a lot that has been going on behind the scenes,there is no way any1 would snap just because of that comment but twitter is full of know-it-alls who think they know the whole story from a single tweet.mxm #nomzamo

Will we ever know what really happened between Maps and Nomzamo? Twitter users are hoping he does something to annoy Nomzamo one more so she can open the can of worms!