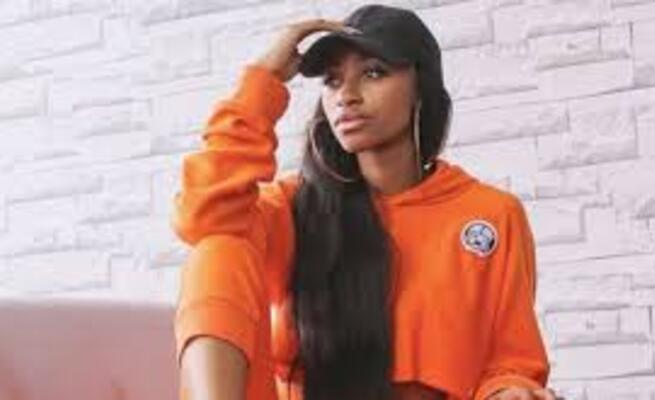 After having spent most of her time in the 8 working-hour corporate world, the 28-year-old songbird Thabsie has finally decided to trade her suits and ties for microphone and the guitar as she joined the entertainment industry.

Thabsie whose husband of five years, Thando Vokwana (34), is her best supporter is not looking back, and has already dropped a single track to taste the waters, while an album is in the production studios.

She said most people are not aware of the goings on in her personal life because she is a secretive person: “A lot of people don’t know that because I keep to myself. I married someone who’s not in the industry and who likes their privacy so I respect that,” she said.

When the Drum magazine news crew visited the couple's 'mansion' they were welcomed by Thabsie who was being accompanied by her lovely dogs.

Bentley, is a blue-eyed husky, while Luna, is a golden-brown little Yorkie, who doesn't like many people around, especially new faces. “She doesn’t like a lot of people. Whenever there’s more than two people in a room, she shies away,” explained Thabsie who has a similar trait.

“Something people don’t know about me is I have major social anxiety. It’s so bad that I don’t like events. I don’t do red carpets much. I’m a really good cook,” she revealed, her smile lighting up the room. She said her husband Thando's favourite dish is fish.

“He’s got a really good heart and he loves to love,” she said of her husband, who works at an investment bank.

He is also her pillar of strength. “He really has bettered my life. He got me into fitness. He always tries to empower and help me grow, and he’s the one who encouraged me to go into music. He’s very supportive,” she said.

Thabsie is not new to the industry, she has belted hit after hit. She featured on Kwesta’s banger Ngiyaz’fela Ngawe, not forgetting her song African Queen featuring JR, and 2019's Macala side by side with Mlindo The Vocalist. Not only that, rer 2017 first album, Songs About You, won her a Sama nomination.

She hopes to maintain the tempo or even surpass her previous compositions with her forthcoming album.

“I always write about love. I think it’s important we explore the different avenues of love because it’s not always just roses. There is pain, hurt and lost love. So as much as I sing about love, I don’t want all of my songs to have a one-sided, one-track message because love has so many elements,” she said.

Thabsie gave her fans a sample of what to expect in her following offering with a single called Sphesihle: “Sphesihle is the name of a girl who was close to someone who is close to me. We wanted to write a song in honour of her. However, the greater message can apply to everyone – it’s a last goodbye to a loved one,” she said.

“It also touches on us being too busy for our loved ones and how sometimes it can be too late to say you’re sorry or tell them you love them because your life was too hectic and you never made time for the person you love,” she added.

She co-composed the track with another songwriter Nhlamulo 'Nota' Baloyi. “A lot of people have asked me why I don’t collaborate with other females. I tried to approach some females to work with me on the album and a lot of them didn’t want to," she explained.

“Although I’ve worked with artists like Fifi Cooper, Rouge and Nomuzi [Mabena], those aren’t the people I approached,” she said adding that she wanted to bring a new element.

Although some of the people she approached with a collaboration proposal failed to live up to their promises, she doesn't hold any grudges: “We’re in a very busy industry so no hard feelings,” she said.

“I’ve had some fellow artists do some funny things over time. There’s a lot of greed at times, where people feel like we can’t all get some of the limelight. I’ve had people not honour their word, go behind my back and do funny things and say untrue things, which is not cool,” she said.

Thabsie is one such person who minds her own business.

“You must pay your dues for a long time, so you’re expected to work and not get paid in this industry. I come from a corporate setting where you work and get paid. Then I had to come into an industry where there are certain things you have to do for exposure in the name of being a new artist and growing. That’s something I don’t like because you cannot make money from the get go,” she added with a laugh.

Besides music, she also makes use of her economics degree by going into a business she’s very passionate about, a hair products line called Colour Queens which she established in 2018 together with BFF Yolanda Vilakazi, Kwesta’s wife.

“Our niche is colourful extensions, weaves and wigs. We are looking at expanding. With a name like Colour Queens the possibilities are endless, so we’re looking at branching out into other avenues in the beauty space,” she said.