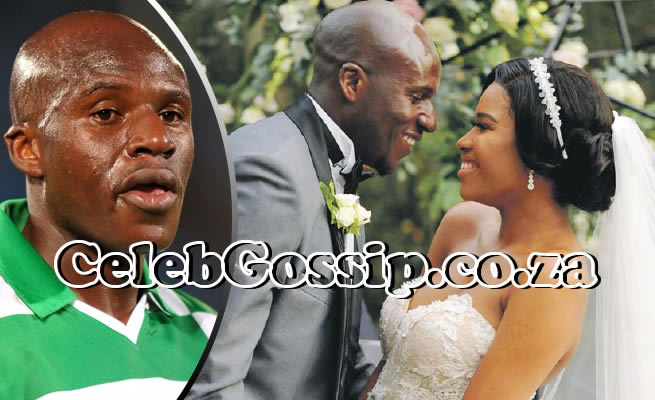 His eyes are filled with tears while he gazes at his wife-to-be as she walks down the aisle, wrapped in a strapless nude and white wedding gown. When she gets to him they hold hands and look into each other’s eyes.

“I will always love you and take care of you, my wife. Thank you for always being my number one supporter,” Musa Bilankulu pours his heart out.

On Friday, the Lamontville Golden Arrows defender Bilankulu (35), tied the knot with his best friend Nosipho Majola (25), in an intimate and lavish ceremony at the exclusive, Inimitable Wedding Venue in Muldersdrift, on the West Rand.

Just an hour before the couple said “I do”, Bilankulu shared with City Press how he met the love of his life.

“I miss her [Nosipho] so much. I last saw her on Sunday and I cannot wait to see her again, especially in her wedding gown,” said a calm Bilankulu.

He said patience and persistence helped him win Majola’s heart.

“I met her three years ago at the Gateway Mall in Durban. I was about to pay for my parking but I had forgotten my wallet in my car. When I went back to fetch it, I saw this beautiful woman. I knew that day she was going to be my wife.”

But Majola wasn’t interested though. When he asked for her phone number, she asked him to follow her. “I drove behind her until she stopped at a petrol station. She was shocked to see my car there as she thought I’d not followed her,” he said.

But eventually she relented and gave him her number. “Even after she had given me her contact details, I still struggled. I had to lie and said I was a financial advisor working for a popular bank because she had told me that she didn’t like dating soccer players as they always make headlines for all the wrong reasons,” he said.

She only found out five months later that he had lied to her about his profession. “One day I received a call from a friend who told me that he had just seen my boyfriend on TV. Golden Arrows were playing against Sundowns. When I switched on the TV, I saw him,” Majola said. “I was shocked and I immediately blocked him because he had lied to me.”

But it was too late for her to change her mind because she had already fallen in love with Bilankulu. She knew then that he was her soulmate.

“I had to convince her that she was in love with me and not with my profession. As soon as she realised that, we were happy in our relationship. It’s sad that people have painted all of us with the same brush as soccer players,” he said.

They are a match made in heaven and share a beautiful 11month-old daughter. Majola said being with him she has learnt to be patient, persistent and not to give up on her partner. She described him as a caring dreamer.

“Nosipho has taught me to love myself first before I love the next person,” he smiled.

Former Bafana Bafana midfielder Kagisho Dikgacoi was the best man. Popular Muvhango actress Kamo Modisakeng was one of the celebrities who graced the occasion.