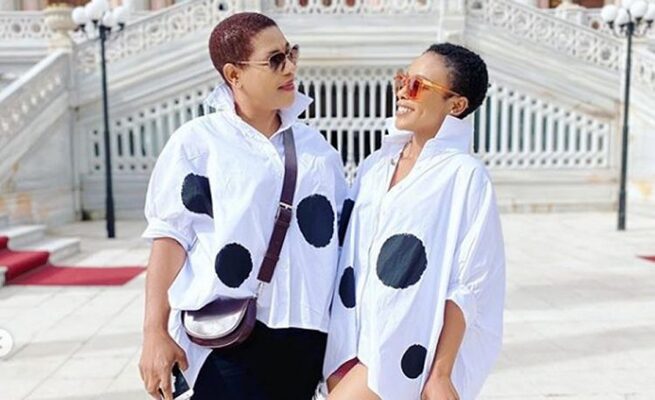 There is always a way to say thank you to one’s parent(s) and renowned actress and media personality Nomzamo Mbatha did it in her own way and style when she subjected her mother on her first ever international trip.

For her mom, it will remain a Happy Women’s Day gift to remember.

At this point and time, Nomzamo is in Turkey taking her mother on a sightseeing tour and giving her the opportunity to have a feel and touch of the melodies of this interesting country.

“This is her first international trip and I have enjoyed every single moment. She is the funniest, strongest and the most incredible woman. I’m so blessed to live out my childhood dream of having her see the world!,” Nomzamo posted of their adventures.

Nomzamo is not only a film, businesswoman and television actress, but also a human rights activist, brand ambassador and who enjoys traveling.

In a short span of time, her journey has taken her from a contestant on a talent show to one of Africa’s most sought after stars.

In August last year she landed a role in Eddie Murphy’s sequel Coming To America 2 in which she co-stars alongside Arsenio Hall, Tracy Morgan and Garcelle Beauvais.

When Mbatha visited Mzansi at one point, her Lighthouse Foundation put smiles on the faces of several students after donate more than R1 million in bursaries. Each of the bursary recipients was invited to a special brunch, which was held at the Fairmont Zimbali Resort near Ballito in KwaZulu-Natal.

“This year is a big year for her as an actress as her various projects come to light,” Nohashe said.

Her influence and mass appeal has led to several prestigious roles in film and television as well as ambassadorial appointments by world-renowned brands. Nomzamo was appointed as a UNHCR Goodwill Ambassador in January 2019.