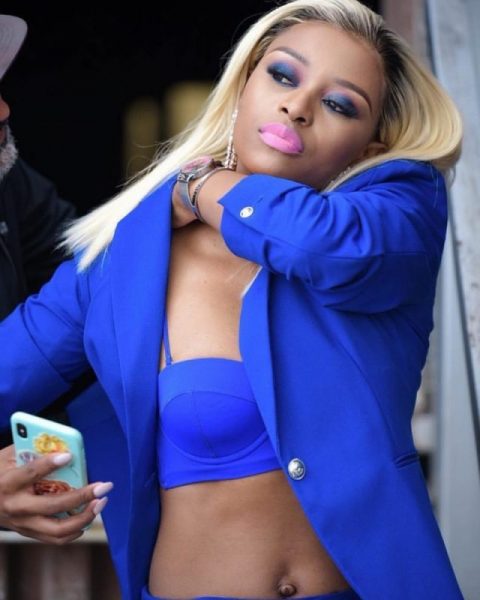 Local producer DJ Zinhle who is known for her ability to keep her cards close to her chest might have finally casted a shadow at AKA, who is her former-boyfriend and baby daddy.

When the news of her split with AKA broke out, she managed to hold her guns and maintained a respectable form of silence.

The "Fela In Versace " rapper found himself topping the trending charts this past week after a video footage of him falling on the floor while trying to surf the crowd spread far and wide like a veld fire.


To many, it was common to witness his arch-rival Cassper Nyovest mocking him for the embarrassing scenario, however, the incident also exposed how DJ Zinhle might of late be feeling towards her ex-lover.

During her performance at the Annual Summer Chillout festival in Bloemfontein, the "Colours" famed singer teasingly jumped on a speaker precariously positioned at the edge of the stage while the 2019 song of the year "Umlilo" was playing.

So grateful for those guys who made sure I didn't fall. I felt the imbalance but they adrenalin was also having me. 🙏🏾 https://t.co/VgtrL89kLP

In the video, which was shared by a follower, DJ Zinhle could be seen on the speaker frantically trying to prevent herself from falling and fortunate enough two people came to her rescue by holding it still.

She tweeted this and said: "So grateful for those guys who made sure I didn't fall. I felt the imbalance but their adrenaline was also having me."

However, Tweeps made news out of it suggesting that her selection of the wording was directed at her ex-boyfriend AKA.

The duo ended their romance at the end of last year.

Rumours of their break up started when Zinhle went on holiday with her BFF Pearl Thusi to Mauritius and AKA jetted off to South Korea on a solo holiday.

After weeks of speculation, AKA confirmed their break-up in an interview on Metro FM in January.

The “Fela In Versace “hitmaker told DJs Sphectacula and Naves: “It’s been a crazy start to the year, I had to go away. I went on holiday. I was just speaking off-air that I went on a very cold holiday. As people might have noticed it’s my first holiday being a single man for many, many years.”

In February AKA also tweeted: “I’ve been single since 2019. What was I supposed to do? Inform you?”

AKA and Bonang finally decided to go public about their relationship, which has since collapsed.

So grateful for those guys who made sure I didn't fall. I felt the imbalance but they adrenalin was also having me. 🙏🏾 https://t.co/VgtrL89kLP

However, Tweeps thought her choice of wording was aimed at her ex-boyfriend AKA.

I saw what you did right there🤣🤣🤣🤣🤣 pic.twitter.com/nBOgoxU94f