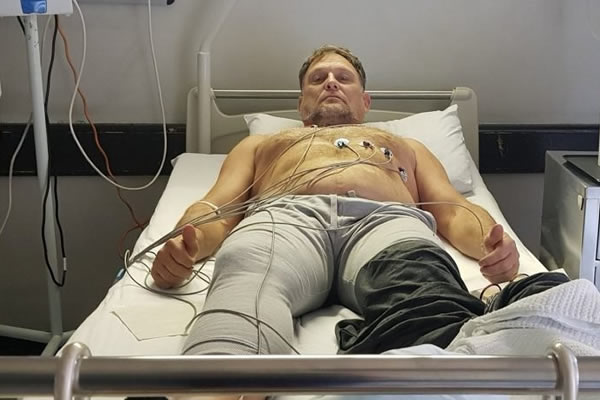 Afrikaans musician Steve Hofmeyr is set to return to the stage this weekend after a blood clots scare
The singer was taken to hospital this week after the blood clots passed through his heart and lung.

Die Bloubul hitmaker’s team says he was admitted on Wednesday morning for observation.

Lucky for Steve no “short-term” damage was caused.

Speaking to TshisaLIVE, Steve’s assistant Leeza Mulder says he is still in hospital, but recovering well.

She added that the singer’s wife was by his side in hospital.

“He is doing fine. It was just a scare and we are grateful he is okay. He is in a general ward and should be discharged on Thursday afternoon or Friday. Doctors are happy with him. Everyone is happy.”

Steve is scheduled to play two gigs this weekend, and Leeza is confident he will be able to perform.

“He will rest up but he wants to see his fans. No shows have been cancelled,” she told the publication.

Steve is in good spirits after his ordeal. He took to Twitter to share a picture of himself in a hospital bed.

The 53-year-old thanked his fans for their support, saying their messages are better than pills.

“The angel of death swept me again, the old man…. I feel good… More tests tomorrow,” he tweeted on Wednesday.