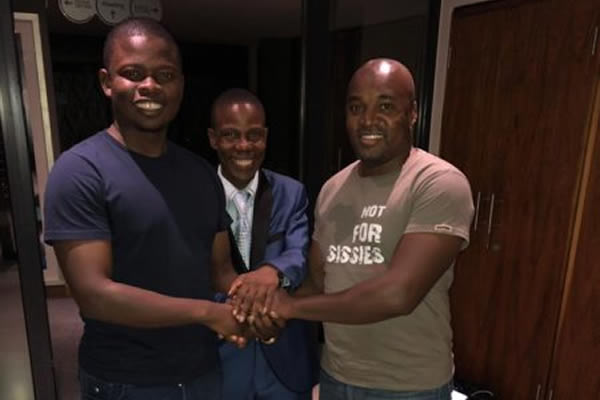 God appears to be working wonders for South Africa based preacher Prophet Shepherd Bushiri who, finally, has been accepted as a brother by almost all people that were deemed his enemies.

Peace be upon us: Prophet Bushiri and his nemesis, businessman Antonio Martin, have agreed to stop fighting after prophet Paseka ‘Mboro’ Motsoeneng also buried the hatched with Bushiri

The Malawian-born preacher was, for the past years, a centre of verbal attacks from various individuals mostly online news platforms and social- media.

The list also includes bevy of women who have testified that they were bought to tarnish the image of the Enlightened Christian Gathering (ECG) leader including inventing rape cases.

Heavens have since smiled for Prophet Bushiri as he is now a darling of all the strands of people that were his vocal critics and some deemed his enemies.

Just few weeks after pictures emerged of him eating on the same table with Prophet Mboro, online websites are now buzzing with Prophet Bushiri sharing a lighter moment with Martin Antonio, who have been warring since 2016.

The two fell out after Prophet Bushiri made a prophecy concerning Antonio family, something which fazed the businessperson to start attacking the Prophet through Facebook posts and running a Bushiri Must Fall campaign.

The two agreed to bury the hatchet and withdraw intimidation, assault and defamation charges.

They have come together, offer apologies and both agreed on a way forward that is based on mutual understanding.

Mboro said he initiated the peace negotiation as part of his #Mboro50 campaign which is aimed to unite warring parties, according to Sowetan newspaper report.