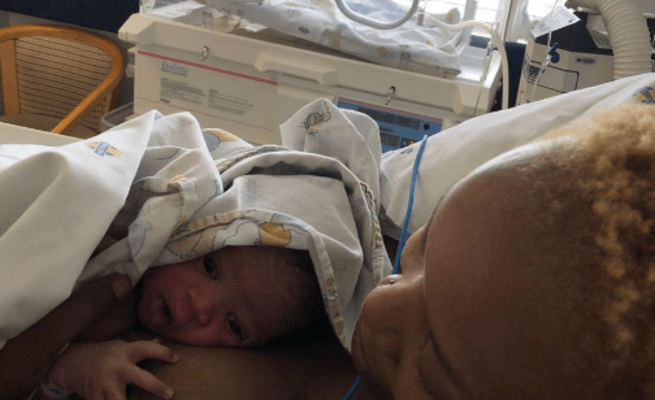 Zoleka Mandela is a fighter and recently shared how her daughter too had overcome health struggles.

Taking to social media recently, Zoleka posted a beautiful picture of her one-year-old daughter Zenzile Bashala on her birthday, and reflected on how she nearly lost her after birth.

Zoleka revealed that she was struggling with depression during the pregnancy and was taking medication, only to later find out that it had an effect on the baby.


"Soon after I conceived, being pregnant and on antidepressants resulted in her being incubated after birth – there were issues with her breathing and her heart rate."

To add to her stress, Zoleka said that Zenzile suffered an illness just a few days after they were discharged from hospital.

Zoleka has beaten cancer several times and believes that her daughter got the her fighting spirit from her.

"We almost lost her but this one is a fighter just like me," she added.

Zenzile is now happy, healthy and growing, and Zoleka was thankful to God for the blessing.

"She literally wakes up with a smile every single morning and even when she’s ill, she’s so stubborn and short tempered (also like me)," Zoleka added.

Zoleka received messages of support and love from fans

One user wrote: "Happy birthday, Princess". While another said: "Beautiful baby girl in a beautiful kente".

Have I told you guys about this 1yr old called, Zenzile (meaning: one who can overcome life’s obstacles and make a way for herself) Zondlile (meaning: she has nourished herself) Mutoba (meaning: light or someone born to be with kings) Bashala? I had gone to a fertility clinic (after my menstrual cycle decided to show up after what was almost a year of waiting for it) because I wanted assistance with not falling pregnant but with conceiving twins (but secretly wishing for quadruplets) … by the time time I made it to my first appointment, I was already pregnant with her! 🤣 Also, she was a scheduled C-Section but my water broke as I was busy packing dishes in the kitchen and I was in labour for just over 5hrs. Depression hit me hard! Soon after I conceived, being pregnant and on antidepressants resulted in her being incubated after birth – there were issues with her breathing and her heart rate … then she suffered an illness that had her coding just a few days after we got discharged from hospital. We almost lost her but this one is a fighter just like me. 🙏🏾 Have I told you guys that my baby is the most happiest and healthiest? She literally wakes up with a smile every single morning and even when she’s ill, she’s so stubborn and short tempered (also like me) and just so happens to be mine so that makes me epically AWESOME!!! 🤪 Just thought I would show off my genes seeing God continues to show up and show off in my life!!! ❤️ #ZenzileBashala #BabyBashala #LittleMissBashala