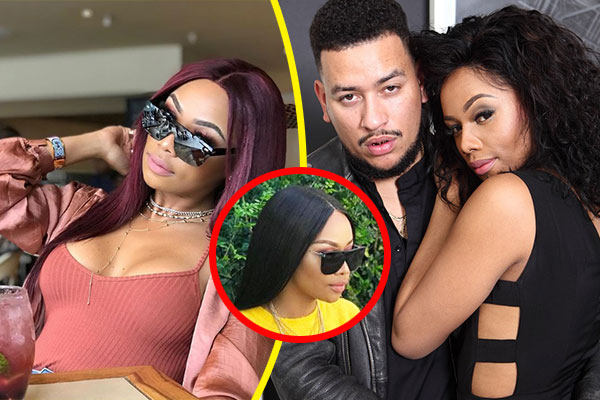 TV and media personality Bonang Matheba has asked to be kept out of AKA and DJ Zinhle's mess. This is after a twitter user dragged Bonang's name into DJ Zinhle and AKA's love triangle. The twitter user tweeted that she cannot wait for Bonang and DJ Zinhle to kiss and make up.

It is no secret that Bonang and DJ Zinhle have not been on good terms ever since it was rumoured that Bonang was dating AKA. DJ Zinhle called it quits with AKA after a 3-year long relationship in 2015, this after DJ Zinhle accused the rapper of having an affair with Bonang.

AKA and Bonang finally decided to go public about their relationship, which has since collapsed. Fast forward to 2019, AKA and DJ Zinhle had all of us shook when AKA posted a picture of DJ Zinhle sitting on his lap on Instagram with the caption "opposites attract". The pair finally decided to rekindle their love and started co-parenting which was amazing. The #Zeenation was on cloud nine and congratulated them.


The pair had Mzansi breathing through the wound with their major couple goals and baecations somewhere remote and romantic, however, in December rumors started making the rounds that they broke up.

After weeks of speculation and subtle hints on social media, AKA confirmed that he and DJ Zinhle had split because there were too many people meddling in their relationship, particularly DJ Zinhle's friends Pearl Thusi and Moozlie. Another supposed reason which led to their split was because DJ Zinhle was spotted partying with Cassper Nyovest in Cape Town and that AKA's mom always sided with Zinhle when the two fought.

While Bonang decided to drink water and mind her own business, she continues to be dragged into the saga. In a response to a tweep who has been longing for her to reunite with DJ Zinhle, Bonang responded: “Keep my name out this mess."

We all did not see this one coming hey! AKA on the other side has since found a new love in the arms of Nelli Tembe. The pair were pictured strolling through the streets of the Mother City this past weekend.

We hope Mzansi got the message because Queen B does not have time for this.

Last year, DJ Zinhle spilt the tea on her relationship with her baby daddy, AKA, explaining that her decision to reconcile with the rapper after he cheated on her with Bonang Matheba had nothing to do with the couple’s daughter.

Their relationship has constantly come under public scrutiny and this reached an all time high after they decided to rekindle their romance after AKA’s break-up with Bonang in 2018.

DJ Zinhle was criticized for taking back AKA and has been labelled by tweeps as everything from “desperate” to “an ambassador of forgiveness”.