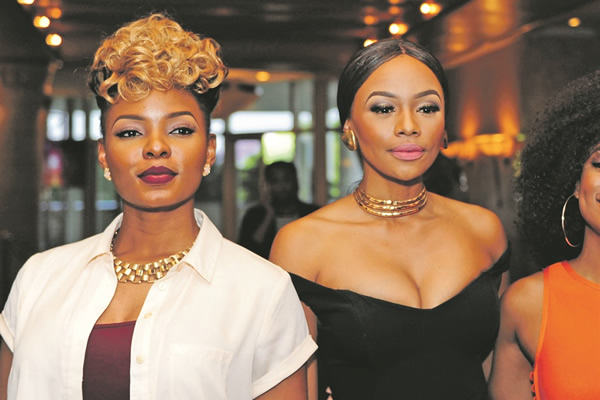 Queen B had nothing to do with the couple calling it quits, but social media users found a way to put her name in the mix.

A Twitter user shared a screenshot of a tweet Bonang allegedly made shortly after the news surfaced that Maps and Nomzamo were no longer an item.

“But I did tell Nomzamo Mbatha you must quitted Maps. But you was exciting by that nerdy class boy. This mans is not loyal. Look what is happens by me and AKA (sic),” the tweet read.

Why didn’t she listen to bonang 😂😂😂😂 Nomzamo😭 pic.twitter.com/ixsJ7ILoBH

Bonang has previously come under fire for her use of the “Engrish” language, but the TV presenter knows how to put a sentence or two together.

While some could see that the broken English clearly did not come from the 30-year-old’s account, others fell for it
Bonang herself replied to the screenshot.

One Twitter user could not tell that Bonang found the whole thing amusing and mistook her tweet for sympathy for Maps and Nomzamo’s situation.

“Queen B is feeling sorry for Nomzamo and Maps’s breakup…or is she pretending! I mean she just experienced it with AKA a few months ago,” the tweet wrote.

Queen B is feeling sorry for Nomzamo and Maps's breakup…or is she pretending! I mean she just experienced it with AKA a few months ago 🙄😭 https://t.co/xmgddMyQ08

At this point Bonang was in stitches
“How do ya’ll come up with this stuff? Unreal,” she replied, adding several laughing emojis to her tweet.