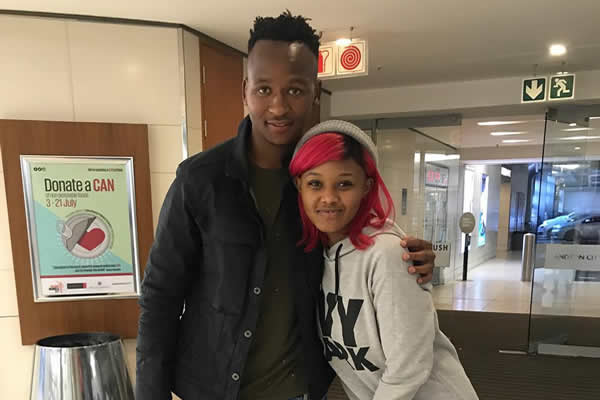 Babes Wodumo and ex-Kaizer Chiefs goalkeeper, Brilliant Khuzwayo have poured cold water on dating rumours
This after the rumour mill went into overdrive after the Wololo hitmaker and Brilliant were apparently seen getting cosy at the Umlazi Picnic music festival last weekend.

Apparently they were seen laughing together and then social media detectives found a few pictures of them at the same places recently.

However, speaking to Isolezwe Brilliant slammed the rumours, saying he had no idea where it came from.

Brilliant flat out denied that he and Babes had any sort of relationship.

An angry Babes also questioned whether every man she spends time with is going to be suspected to be her new boyfriend.

Babazani bo….our very own gqom queen @babes_wodumo it was great seeing you sis wamie … god bless your hustle … durban all the way …

Babes’ personal life has been making headlines ever since Masechaba Ndlovu confronted her during a Metro FM interview, about being allegedly abused at the hands of ex-boyfriend, Mampintsha.

A video of the interview went viral at the time and showed Babes’ emotionally breaking down, and had to be comforted by friends.

In the wake of the debacle Mampintsha neither confirmed or denied the allegations but blamed a “third party” for the situation.