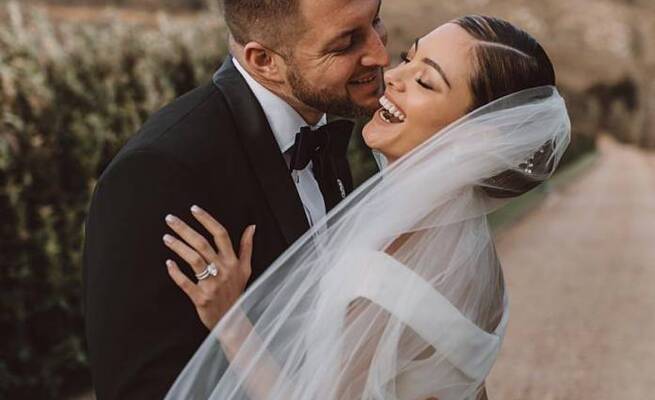 Demi-Leigh Nel-Peters and American footballer Tim Tebow's wedding earlier this week was nothing short of a fairytale.

The former Miss Universe tied the knot with her bae on Monday in Franschhoek, Western Cape.

Tim brought his family and friends to SA to enjoy several days of wedding festivities, which led up to the magical ceremony.

After a couple of days of keeping the details and scenes of their wedding on the down low, Demi-Leigh gave fans a first look into their glamorous day at the wine country venue.

She posted a video of the couple walking hand-in-hand after the ceremony and sharing several intimate moments.

According to People, the couple exchanged vows during a sunset ceremony that combined elements from both American and SA cultures.

The publication reported that Demi-Leigh opted for a custom gown from the latest collection of David's Bridal. She rocked a scoop-necked dress, that also had covered buttons down the back with slight off-the-shoulder straps.

“We’re both very traditional. We wanted to look back at the wedding and see that it was intimate, elegant and traditional. We definitely wanted it to be something that we could look back on and know that nothing was dated. We want to remember this day for the rest of our lives,” Demi told the mag.