She insinuated that people who are asking her husband for money will never see it because she pulls the purse strings in their relationship.

Former reality TV star and wife of soccer player Andile Jali, Nonhle, has had to issue a public apology to her husband after an attempt at making her followers laugh on Instagram Live, at the expense of her husband, was misunderstood.

In a video snippet that was recorded by a follower and shared to various social media platforms, Nonhle can be seen speaking into the camera about how the finances in her marriage are handled.

She insinuated that people who are asking her husband for money will never see it because she pulls the purse strings in their relationship.

The clip, which begins at an arbitrary point in her live stream (and therefore lacks context) begins with Nonhle alluding to the fact that her husband may have bought someone else Peruvian hair extensions with money that was intended for their children.

She went on to advise other women about how to control their partners’ reckless spending.

“Hao batla monna ha sao phaphele, take ownership of the card, o ska lwana. Nka card ya hae, o bone ho re o tla phapha na,” said Nonhle. The statement loosely translates to: “If you do not want a man to get one over on you, take ownership of his bank card. Don’t fight, just take his card and see how he’ll mess about without it.”

The follow-up statement was Nonhle basically stating that she found her husband in the ghetto and cleaned him up.

“I took an old rag and I turned it into a clean facecloth, a white one,” she said.

Many of the people who were viewing the live stream and saw the various clips of it that were posted thereafter found fault with her statements and lambasted her for it.

Nonhle is outchea really calling herself the headquarters 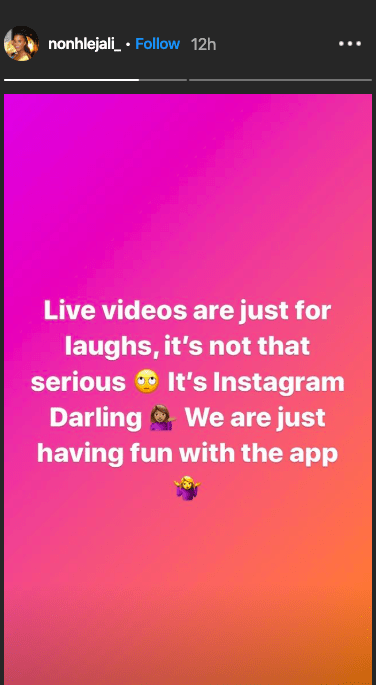 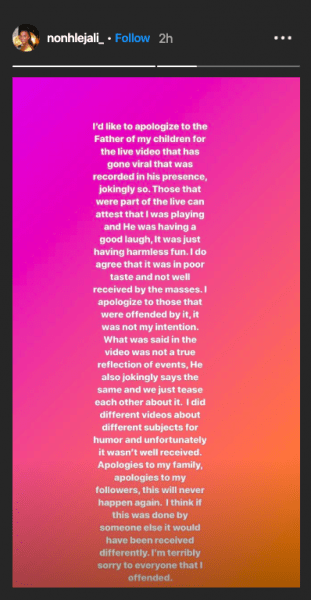 In the first, she tried to make it seem as though the video was in jest before going on to explain her position. She then apologised to her husband, her family and her viewers before vowing to never do this again.

She added that she felt as though her joke would have gone over differently had it been made by someone else.

I dont get why no one is taking the fact that Nonhle said thats how they play, ubengamhlebi, the man was right there, yall just want your own conclusions to win this lol.

Andile has not publically said anything regarding what happened.