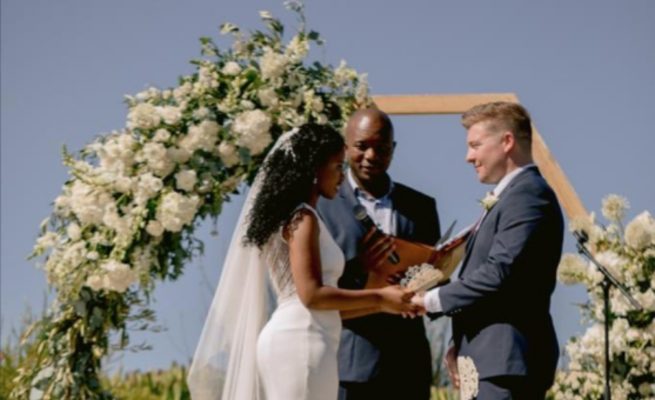 MANY people on social media were shocked to see Mmusi Maimane officiating a wedding.

But Maimane told Daily Sun he was just doing it for his former colleague.

The former DA leader, who is also a pastor, married Graham Charters and Siya Hayi at Cavalli Estates in Stellenbosch, Western Cape, at the weekend.

He said he was asked by the couple to marry them and he did it.

Maimane said he also helped the groom, who is the DA’s chief of staff, with the lobola negotiations a few months ago.

Maimane gave the couple an encouring message at their wedding.

Graham said: “He spoke about faith, love and hope, and said our relationship and marriage will bring hope not just to us, but to the nation.”

He shared with Daily Sun how he met Siya.

“We were both law students at UCT but we never met. So we started following each other on Twitter and one day I sent her a DM asking to take her out for coffee,” he said.

Many people had a lot to say about the pictures on Twitter.

Miss Masombuka: “I love how few of our people seem to correlate the rise in visibility of these relationships and marriages with the land issue. For a long time we have been ignoring the existence of mixed race marriages.”

Across_the_universe: “Mmusi is clearly committed to a non-racial South Africa.”

Miss Tlolo: “The pastor saw that he can unite the country in other ways.”

Maimane recently launched The People’s Dialogue alongside former Johannesburg mayor Herman Mashaba, after both politicians stepped down from their positions and as members of the DA in October, following the election of Helen Zille as the party’s federal council chairperson.

Rather than a political party, the dialogue is a platform where they will engage with South Africans in a “positive, solutions-oriented discussion” addressing the country’s numerous challenges.

In a statement, Maimane said the platform would be free from “the constraints of our political system”.

“The events of the past two weeks in the metros, and the return of continuous load shedding, demonstrates the need for a new consensus. Clearly, we need a new vision for a tomorrow for all our children, shared by all the residents of our country,” Maimane said in the statement.

“This is not party politics, it is a sincere effort to bring forward a shared understanding of our challenges, and how we can best resolve them. South Africa needs men and women who are willing to lay all aside, move past what makes us different, and work together towards the building a shared future, collectively owned,” he added.

We met on @Twitter
I slid into her DM’s
We fell in love
And I asked her to marry me.

This is a God dream ❤️ pic.twitter.com/gkNS7AnLap