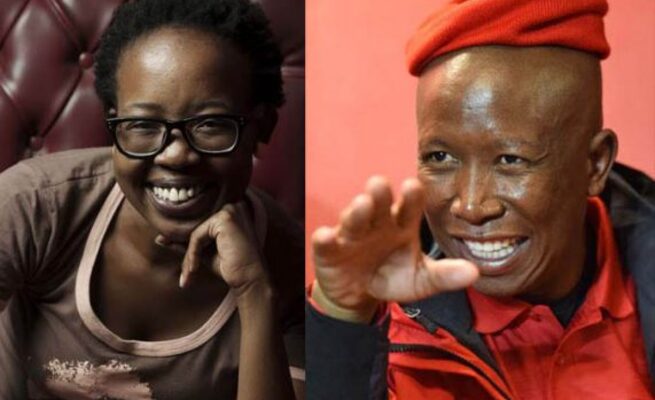 The outspoken poet has attempted to deconstruct the EFF’s leader ideology and concluded he’s not what Steve Biko would have promoted.

Poet Ntsiki Mazwai has caused a stir on social media following her comments on black consciousness and being woke.

According to Mazwai, she is more woke and conscious than most men who are deemed to be, only that South Africa listens more to men than women.

She said The Daily Show host Trevor Noah and Sizwe Dhlomo were smart – book smart, according to the poet and musician, who also has a PhD from Rhodes University.

Economic Freedom Fighters leader Julius Malema was definitely not woke, added Mazwai, who claimed to be closer to Robert Sobukwe and Steve Biko in ideology than Malema.

Father your children don't know that Biko and Sobukwe were more like Ntsiki Mazwai than Julius Malema……..

In a video she posted on social media on Friday, she said: “Julius Malema is not woke. He’s a man that holds a lot of power. He’s thriving in our community because he’s the type of man that Christianity has created.”

If Malema were woke, she argued, Andile Mngxitama would still be in the EFF because the party’s leader would have seen the “the vision” and “realise that Mngxitama brings content to the EFF”.

A black conscious man could also be judged by the “type” of woman he dated, added Mazwai, who emphasised that she was in no way dissing Malema’s wife of five years, Mantwa.

“If he was black conscious you would even see the type of woman he has. He would have a very strong-willed, natural woman next to him.

“I’m not dissing his wife or anything, I think she’s a lovely lady, but I don’t think she’s the black consciousness model. Julius Malema is not more woke than me, he’s just a man and we live in a country where men’s voices are heard louder than women’s. You can have him as a leader, I don’t really care.”