Home Celeb Gossip I looked at my face and knew my career was over with... 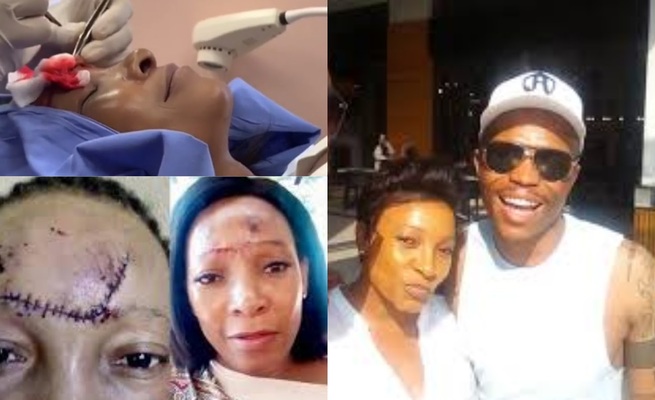 Palesa Madisakwane on healing after her ordeal

ACTING is all she’s ever known. So when she saw the bloody gash on her forehead, all she could think about was who would cast her with such a big, ugly scar? The question plagued Palesa Madisakwane since the horrific crash that nearly claimed her life last year.

Yet when she lifts her heavy fringe the scar is barely noticeable, and she’s thrilled to be acting again.

Palesa (42)was back on TV in Dream: The Lebo Mathosa Story, in which she played Mamfundisi, Lebo’s stepmom. “It was a small role,” she tells Move!.

Yet the former Generations star is concerned about her future because her injuries are more than skin-deep. “Sometimes in a conversation I forget what I want to say.”

Blackouts, short-term memory loss and constant headaches are just some of the things that have affected her since the crash.“I don’t know what’s going to happen to me because I work with scripts,” she tells us.

It’s been a rocky couple of years for Palesa. First, she lost her job as a news anchor on ANN7. Later, the bank repossessed her Mercedes-Benz and then she bought a second-hand car and the crash happened.

Palesa and her then-9-year-old daughter, Mohumi Zoe, were on their way home from her niece’s traditional wedding in the Vaal, Gauteng.

The actress stopped her Toyota Etios at a red traffic light on Witkoppen Road.

She was singing out loud to Pastor Benjamin Dube’s album when the traffic light turned green. As she was about to take off, she was blinded by bright lights and heard a deafening bang. Palesa realised she couldn’t get to Mohumi in the back seat. All the doors had jammed and they were trapped. Having taken a knock to her head, she lost consciousness. Minutes later she was woken by a couple who came to her aid and called emergency services.

“I looked at my face and knew my career was over with that scar,” she says.

She opted for plastic surgery done by leading plastic surgeon Dr Ridwan Mia. The Letsiki family footed the bill, Palesa says. Her niece had married into the family, so the groom’s family offered to pay because she had spent the day with them at the wedding.

Palesa has started a foundation called Come Out, named after the terror of that fateful night when Mohumi was trapped in the car. The foundation helps car-crash victims access services provided by the Road Accident Fund (RAF).

“There are a lot of things we don’t know about the RAF, . For example, I didn’t know the RAF can pay for a caregiver,” Palesa says.

But now she’s ringing in the New Year with lots of change.

“Even though I don’t have much, I am content with my life and I know God will provide,” Palesa says.